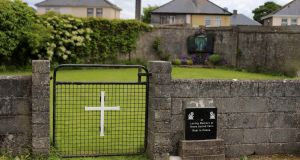 The entrance to a former Mother and Baby Home in Tuam, Co Galway. Photograph: Reuters

Amnesty International has called on the Government to ensure that the Commission of Investigation into Mother and Baby Homes fully investigates alleged human rights abuses, following the discovery of “significant” quantities of human remains in Tuam, Co Galway.

The commission confirmed on Friday remains had been found in what appeared to be a septic tank, although it could not confirm whether the structure had ever been used for sewage.

“Today’s distressing revelations underline the need to ensure that this commission of investigation is a meaningful opportunity to finally and fully ensure truth and accountability for what happened to women and children in these institutions,” said Colm O’Gorman, executive director of Amnesty International Ireland.

“Our thoughts are very much with those most affected by today’s reports, the women who were former residents of the home and their loved ones.”

Mr O’Gorman said the commission “must not repeat the mistakes of other processes, in particular the Government’s response to reports of abuse of women and children in the Magdalene laundries”.

Amnesty also noted the longstanding concerns about how children and women were reportedly treated in such institutions, including apparently high child mortality rates, alleged illegal adoption practices, vaccine trials conducted on children without consent, and denial of medical care to some women.

The commission is due to release its final report next year.

Researcher and historian Catherine Corless said Friday’s announcement had vindicated her work, which revealed death certificates for 796 children at the Bon Secours-run Tuam home with no indication of where they were buried.

“This is only the start. The truth has been revealed,” she told RTÉ’s News at One.

Ms Corless called on the commission and the State to contact the families of the survivors of the homes.

“The survivors should be contacted and consulted about the fact of their loved ones being discarded. They deserve an apology from the Bon Secours order.

“My one hope is that the truth would come out and that they will find a resting place,” Ms Corless said.

She pointed out that brothers and sisters of the babies who died had not been contacted by the commission or the State and had found it very difficult to get answers.

“They gave their accounts to the commission when invited, but they didn’t get any answers to where their loved ones were buried.”

Ms Corless said all the evidence pointed to the site at Tuam being a mass grave. “It is a total relief for me. This could have gone either way. It could have been covered up,” she said.

She alleged the local county council, gardaí and religious order knew that there were remains there but had covered over it.

“I was told to leave it, that it was something that happened years ago.”

She went on to call for further investigation of a green area and a playground which she believed covered over shallow graves. “It all needs to be investigated.”

On Friday, 60 women who were sent to mother-and-baby homes in the State said they were distressed at the “regrettably uncertain” confirmation of what appeared to be mass graves of babies discovered at the site of the former home in Tuam.

Irish First Mothers questioned whether 2014 media reports that there were 800 bodies on the site were “substantially correct”.

“We call on the commission and Minister for Children’s Affairs Katherine Zappone to immediately quantify the scale of the remains found and end distressing uncertainty. A description of ‘significant remains’ is unclear,” the group said in a statement on Friday.

The group said so-called “unmarried mothers’’ homes were in operation until the early 1990s and that its members were “very much alive and range in age from late 70s to early 40s”.

“These mothers are currently testifying in secret to the commission and the process is making them feel like they are being put on trial for giving life.”

Separately, the Justice for Magdalenes Research (JFMR) group called on members of the public to this weekend visit the graves of women who had been in Magdalene laundries.

On Sunday, March 5th, the sixth annual Flowers for Magdalenes events will take place in all cities and towns where there were Magdalene laundries.

At least 1,663 former Magdalene women are buried in cemeteries in Ireland, many of whom are in unmarked graves.