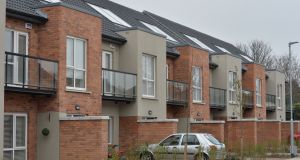 In addition to providing 1,400 new homes, the €405m loan will be used to retrofit and refurbish 700 existing homes

More than 1,400 social houses and apartments are to be be built using a €200 million loan from the European Investment Bank (EIB) matched by €205 million from the State’s Housing Finance Agency.

The money is the bank’s largest investment in social housing to date in the State, and makes Ireland the fourth largest recipient of EIB financing for social housing in Europe.

The fund will be available to the voluntary housing sector, known as approved housing bodies, and not to local authorities.

Two years ago the bank invested €150 million in social housing, which was also matched by the Housing Finance Agency. That €300 million investment fund, announced by then minister for the environment Alan Kelly, was to produce 2,000 social homes, through approved housing bodies.

Speaking yesterday, Minister for Housing Simon Coveney said the fund had supported the construction of 1,302 new homes and the “retrofitting” of 550 properties by eight housing bodies in Dublin, Wexford, Louth, Meath, Waterford, Cork, Kildare and Galway.

Asked if all 1,300 homes were newly built, Mr Coveney said they were provided through a “combination” of means, including construction, and “some were purchased and some were done up”.

In addition to providing 1,400 new homes, the €405 million loan, which housing bodies repay at a low interest rate over a long term using the proceeds of tenants’ rent as well as State assistance, will be used to retrofit and refurbish 700 existing homes.

Following the announcement of the first EIB fund in February 2015, Dublin city councillors had proposed setting up an “arms-length” housing company in conjunction with other large local authorities, which would enable it to borrow from the fund. However, this project did not go ahead.

He said there were approximately 8,500 local authority homes under construction, newly finished or in the planning process.

“This year we’ll probably have 2,500 built. We are dramatically ramping up the capacity in local authorities to build social housing, but we also want to support and ramp up the capacity of approved housing bodies to do the same and that is where this funding comes in.”