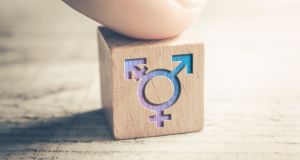 ‘All my life since I was a child I knew there was something a bit different about me. I always wanted to leave my hair long and loved the idea of having earrings and jewellery but I never knew anything about transgender,’ said Erica. Photograph: iStock

A 65-year-old north Cork farmer has spoken of her surprise and delight at the hugely positive response she received after telling how she has started to transition from male to female on RTÉ’s Liveline programme.

Erica Coates, who was born Eric, said she was prompted to ring Joe Duffy upon hearing how a 22-year-old man was having difficulty transitioning to female.

“I was surprised at the response I’ve got. To be honest I was surprised that Liveline wanted me on in the first place. I would a very private shy kind of person and I was as nervous as hell but Joe Duffy is very professional and it was just like having a chat, one to one with someone.

“I decided to ring in after hearing about that other person and it would be bred in me from my ancestors that if somebody has a problem, you help them out and the way I looked at it, if you could save one life by putting out a positive message, it would be worth it.

“But since I came off the radio this afternoon, the phone hasn’t stopped between calls and texts and emails. All these people ringing up to say fair play, well done and congratulations. It’s all been positive so I’m delighted,” said Erica.

Erica, who lives with her three dogs, Sydney, Jacob and Kirstie at the family farm at Kildinan, midway between Rathcormac, Watergrasshill, Glenville and Ballyhooly in north Cork, told how she only realised she was transgender when she saw a transgender person on the Late Late Show.

“All my life since I was a child I knew there was something a bit different about me. I always wanted to leave my hair long and loved the idea of having earrings and jewellery but I never knew anything about transgender,” said Erica who is a tillage and beef farmer on her 65 acre holding.

“It’s a good few years ago now but I was watching the Late Late one night and there was a person came on and told their story about making the change. I was in my 50s at the time and listening to them that ticked all my boxes. I had just kept it to myself totally for years and years.”

Erica took the plunge in July last year when she went into Debenhams in Cork city and met an assistant on the Lancome counter to ask about make-up. The woman was so friendly and helpful that she announced that she was a transgender to her.

“She was the first person in the world that I said it to her, a complete stranger. I was getting that way, slowly but surely, more feminine bit by bit but that was the day the gate opened and from then on, I was just going across that bridge and I wasn’t going to go back and that was it.

“It was like a sentence over me, my body was free but my mind was inside in solitary confinement, sentenced for life, and the sentence came off and the gate was opened that day,” said Erica who now wears dresses and skirts in feminine colours and pink wellies around the farm.

With support from her GP, psychologist and the Cork Transgender Peer Support Group, Erica had a confirmed diagnosis of gender dysphoria and is currently transitioning to female and all the time drawing huge encouragement from her neighbours and friends in Kildinan and beyond.

“A lot of people have said to me that from the time I came out and crossed that bridge, they told me ‘You’ve totally changed completely – you’re always happy now’ ... I wake in the morning and see my nails done and I wear a dress or a skirt or something and I can’t explain it, but it just feels so right.”