Teenager arrested after allegedly driving over 210km/h during Garda chase 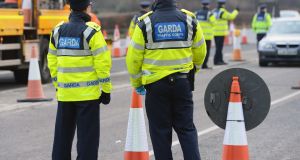 A teenager has been arrested after allegedly failing to stop for gardaí and fleeing across the country for 65km while driving at speeds up to in excess of 210km/h. File photograph: Eric Luke/The Irish Times

A teenager has been arrested after allegedly failing to stop for gardaí and fleeing across the country for 65km while driving at speeds up to in excess of 210km/h.

A driver was initially recorded at a speed check driving over the speed limit at 183km/h and when what gardaí described as a “managed pursuit” began, he sped away.

Though conditions were wet at the time, the driver continued from Co Limerick, where he was first recorded speeding, through Co Tipperary and Co Laois, while pursued by gardaí. The driver eventually stopped at a location 65km from where gardaí first became aware of the driver speeding.

The incident occurred on Wednesday night, though news of it emerged only on Friday, with Tipperary gardaí confirming the details.

“At around 9.30pm gardaí from the Thurles Roads Policing Unit were operating a speed checkpoint on the M7 at Birdhill when they detected a car travelling at 183km/h,” the Garda said. “A managed pursuit from a safe distance ensued with the offending car increasing its speed to over 210km/h at times. Gardaí­ witnessed numerous instances of dangerous driving in wet conditions.

“Assistance was requested by gardaí in Laois but before they arrived, the car stopped in Borris-in-Ossory, some 65km away from where it was initially detected.”

A person who was described as a male in his late teens was arrested and has been charged following the incident. He was set to appear before the courts at a later date.