Teachers’ racism towards Traveller pupils ‘must be addressed’ 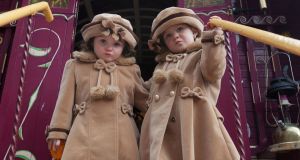 File image of cousins Ann and Maryann during a celebration of Traveller ethnicity at Kilmainham, Dublin. Photograph: Gareth Chaney/Collins

Racism among teachers towards Traveller children must be addressed as part of any move to teach Traveller culture in schools, a leading expert on diversity education has warned.

Karl Kitching, lecturer in the School of Education at University College Cork, was speaking at an event in Leinster House on Wednesday on proposed legislation to mandate the teaching of Traveller culture and history in schools.

“The current understanding of racism in schools is that it’s something that happens between children,” said Mr Kitching.

While there were “very good anti-bullying procedures” in schools, they often “make it look like children are the only ones responsible for racism. Of course teachers . . . can do damage, not necessarily intentionally.”

“These are young teachers who are reflective of the entirety of Irish society . . . There’s a lot of work to be done in the entirety of the school community, not just the children, because the teachers themselves come from a place in a country with a lot of prejudice,” he said.

The Traveller Culture and History in Education Bill has been brought forward by Independent Senator Colette Kelleher.

She said it would improve educational outcomes for Traveller children and therefore benefit the economy. She said all children would benefit from learning about their Traveller peers’ identity, and the Bill would also ensure the State met international human rights obligations.

Last month, Minister for Education Richard Bruton said he had asked the National Council for Curriculum and Assessment to review the position of Traveller culture in the school curriculum.

Speaking on Wednesday, Hannah McGinley, a Traveller mother, teacher and PhD candidate at NUI Galway, said Traveller children learned young “that certain identities are bad, something to be ashamed of and to hide – that is shocking”.

Legislation like Ms Kelleher’s Bill was “well overdue”, she said. It was well known, she added, that children could not thrive or engage in education if they did not feel confidence in themselves.

Traveller children’s literacy and numeracy are behind those of their settled peers.

Dr David Edwards, of the Department of History at UCC, said that if we aspire to be an inclusive society we must make children sensitive to the fact “there are many different groups in a diverse, multiethnic State”.

Travellers were “among the oldest of the Irish” and “the last vestiges of an old, Gaelic, tribal society”, he said, adding that during the Middle Ages, the Irish were a semi-nomadic, pastoral people. This way of life was “knocked sideways by the imposition of direct English rule”, with its insistence on a sedentary life, in the 16th- and 17th-centuries.

“The vast majority of the Irish population today are an acknowledgement of the success of the English plantation project . . . The Travellers resisted, stayed in the margins and managed to retain a semblance of the old way of life. So I think it would be quite easy to incorporate the story of Travellers into the history of Ireland, because they are in many ways the story of Ireland.”