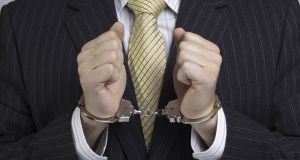 Our real security is to be found in God

The film The Wolf of Wall Street is vulgar, crude, but it is also funny, with black humour and it certainly has a universal morality tale to it.

The 2013 film, currently available on Netflix, is based on the true story, more or less, of stockbroker Jordan Belfort.

Leonardo DiCaprio stars as Belfort. He joins a stockbroking company on Wall Street as a minion, learns the trade before setting out to start his own brokerage, selling stocks to vulnerable people. He’s a born scam artist. With astonishing speed, the company makes a fortune, branching out to attract wealthy investors and then defrauding them of millions.

At the height of the business the company is employing a thousand people. They consider themselves masters of the human race. They have everything to extremes, wine, women and song, drugs too.

Eventually, through the combined efforts of the FBI and the regulator, the Securities and Exchange Commission, the bubble is burst. Instead of mansions, planes, fast cars, and all that goes with such unimaginable wealth, Belfort and his buddies head for jail.

They considered themselves to have everything and yet they wanted more. They never had enough. They were worldly rich but poverty-stricken in wisdom.

Isn’t it ironic how the money markets and the stock exchange use the term “securities” to seduce us into the world of money?

Tomorrow’s Gospel (Mark 10: 17-30) is a well-known story: the narrative of the rich young man, who asks Jesus what he must do to inherit eternal life. He walks away, refusing Jesus’s invitation because he is not willing to get rid of his riches. He does everything right except for that one aspect of his life, which makes him a rich man. The author of the Book of Wisdom, the Old Testament reading in tomorrow’s liturgy, understands that worldly wealth is never the full story, indeed it pales in comparison to genuine wisdom: “I entreated and the spirit of wisdom came to me./I esteemed her more than sceptres and thrones;/compared with her, I held riches as nothing./I reckoned no priceless stone to be her peer,/for compared with her, all gold is a pinch of sand,/and beside her, silver ranks as mud.” (Wisdom 7: 7-9).

It’s easy to be critical of the rich man in tomorrow’s Gospel. But money, power and worldly wealth lure us. We can be so easily blinded by them.

But also it is profoundly annoying and irritating to hear leaders tell us that we have to tighten our belts or warn us against the evils of riches when they themselves live off the fat of the land. That type of talking is a real problem with churches: on the one hand they stress the dangers of wealth and yet they wield significant power and possess great wealth.

There is always the danger of people of power and wealth patronising the less well-off and talking down to them.

I once heard an elderly Dominican priest say that the only hope for the church in Ireland is that it would become a genuinely poor church, stripped of all its power and wealth. Then maybe, in some way or other, the church would be in a position to live and preach the Gospel. Have the churches lost their soul to worldly wealth?

There really are no quick fixes, but at least if we have the good sense and the grace to be aware of the conditions of those who are poor and are struggling to survive, surely we are on the road to be less arrogant and patronising and more empathetic and understanding?

Pope Francis in The Joy of the Gospel tells us that we are called to hear the cry of the poor. Of course, we also have to respond.

If we genuinely make an effort to do just that, we have an opportunity to avoid being slaves to wealth and power.

If only Belfort had kept a genuine eye out for the poor he might never have spent three years in a federal penitentiary.

The Book of Wisdom tells us that “all gold is a pinch of sand”. Our real security is to be found in God, caring for all God’s creatures, and searching for wisdom.