Syrians for Ballaghaderreen: ‘We easily forget our persecuted past’

Roscommon town expecting up to 200 Syrians stands ready to help, but needs support

Councillor Michael Mulligan and former councillor, Michael Scully, have sympathy for Syrian refugees arriving in Ballaghaderreen, but ask if the town has the infrastructure to cope. Video: Keith Heneghan 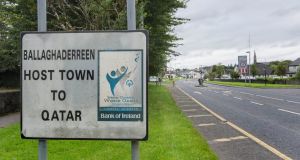 Ballaghaderreen, Co Roscommon: “It is crucial that all sides of this debate show respect to these refugees,” says local resident Debbie Beirne. “The people themselves should never be seen as the problem.” Photograph: Brenda Fitzsimon 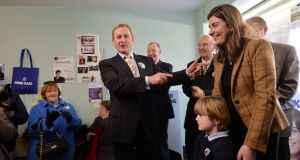 Maura Hopkins canvassing with Enda Kenny in Ballaghaderreen last February: “Our community is well capable of showing solidarity and humanity, and I know we will not be found wanting in welcoming these people.” Photograph: Alan Betson

“This is not some town down the sticks that is incapable of integration. We will work this, and could in six months’ time be seen as a shining light for social inclusion.”

Ballaghaderreen shop owner Micheál Frain says he feels “patronised” by the way the Co Roscommon town has been painted by media after the announcement that at least 80 Syrian refugees will be accommodated in a vacant hotel in the town.

Initial reports said the Syrians would arrive at the end of January. But it now won’t be happening until the end of March, and numbers arriving could rise to 200, says Fine Gael Senator Maura Hopkins.

She has also learned that half of the initial group of 80 refugees will be children.

There is a strong sense of disappointment among locals that the reopening of the Abbeyfield Hotel has been taken off the cards for now, as well as a feeling of frustration at the Government’s lack of consultation.

“We had a vision for the hotel. We hoped it would soon open up and be part of a tourism project which we have been working on in the town as a link to Knock airport,” says Frain, who is also part of a local group working on a Lakes and Legends tourism initiative.

The planned reopening of the hotel was a key part of the project, which would sell the town as a stopover on the way to the airport, a 20-minute drive away.

That vision now seems further away than ever, and the disappointment is palpable in my home town.

The Abbeyfield Hotel was the ultimate symbol of prosperity when it first opened in 2008. With its crystal chandeliers, giant chess sets and long-awaited swimming pool, the Abbeyfield was a badge of honour worn proudly by the local community and a real, physical emblem of the boom times.

When it closed in 2010 and moss slowly began to creep up the tarmac drive and break-ins were reported, its empty, boarded-up cavern came to represent the decline of the town during the dark years of recession.

In July 2015, the news that it had been bought by a Cork consortium called Remcoll brought hope that it might once again open and bring with it the good times of the past.

This, however, is a totally separate issue to the needs of refugees who have escaped horror in their own homes, a point that local woman Debbie Beirne has stressed to the community.

“It is crucial that all sides of this debate show respect to these refugees,” she says. “The people themselves should never be seen as the problem – the problem lies with the town’s capacity, funding and facilities, never the people being sent here.

“The issues should be the lack of preparation and consultation, not the refugees. These people are hugely traumatised. They have suffered untold loss and they do not want to be dislocated.”

Beirne is helping organise a “Ballaghaderreen Welcomes Refugees” meeting in the town on Monday evening, which she says has gotten a good response.

She says the town needs to “pull together” to fight against fear-mongering after one local posted an image on social media of an anti-Islam hate speech leaflet that had been posted through the door.

Frain, too, worries about an undercurrent of racism developing in the town. “It’s not PC for people to say ‘I’m anti-refugee’,” he says. “It’s not worn as a badge of honour, but you may hear it on bar stools.

“Nobody came to me with a pitchfork, but that’s not how it works. I do fear there could be a nasty undercurrent there – we very easily forget our own persecuted past”.

Still, everyone whom I spoke to has been very clear about one point: the community will step up and welcome these people, but that they need the resources to do so properly.

“All I can think of is that little boy on the beach and all I want to do is help these children,” says Sinead Mangan, principal of St Attracta’s primary school.

Even though all of her classes are already over-subscribed, Mangan is resolute: “I will not sit back idly. This is our chance to do something positive.”

But she will need help. “The Department of Education will have to help me. They will have to give resources to us, and I would hope that this will be shared with other local schools”.

“We are well used to this, we have done it before,” she says. “We have dealt with teaching children with no English. This is a very tolerant school, and this will not upset us.”

Local GP Martin Garvey has also called for help so his surgery can adequately look after refugees who have escaped the worst kind of persecution.

“These people have been on a horrendous journey and will likely present with complex, difficult problems, both physical and psychological, which we are not used to dealing with,” he says. “I would hazard a guess that they will have suffered extreme psychological distress which can cause various ramifications, psychological scars and PTSD.

“If the State expected us to step into the breech, I would have liked some engagement first. GP services in this town are already under ferocious pressure, with only a finite number of appointment slots available as it is.”

Help, he says, will be required “if we want to avoid problems down the line”.

Hopkins, a Ballaghaderreen native, says she has been pushing for extra teachers and HSE staff for the town, but “did not get answers which assured me”.

“These people have suffered extreme and terribly torturous events,” she says, “and we need to play our part in helping them as much as our capacity allows. Our community is well capable of showing solidarity and humanity, and I know we will not be found wanting in welcoming these people.”

Hopkins, however, is “extremely disappointed” at the lack of consultation prior to the announcement.

“We deserve better than this,” she says. “I am not convinced at all that sufficient plans are in place for this. We need to know what extra resources and support services will be put in place in order to be convinced that these people will be properly supported.”

Frain, for his part, is hopeful this can be worked out with the right communication.

“It is unfortunate the way it happened, but the department now has to get their finger out, up their game and communicate properly with us. No more smoke and mirrors.”