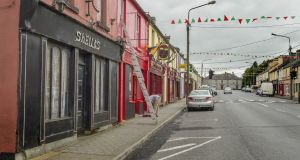 Members of Roscommon County Council have been called to a special meeting of the council Friday morning after officials were informed on Thursday by the Department of Justice that 80 mostly Syrian refugees were to be housed in a former hotel in Ballaghaderreen.

Council members were informed by text message and email Thursday night that the Abbeyfield Hotel in Ballaghaderreen, which has been restored recently after a period of closure, has been selected to house 80 refugees of mostly Syrian origin currently resident in Italy and Greece.

The meeting will take place at 11.30am Friday morning. Officials from the Department of Justice are expected to brief the councillors.

Council officials were contacted late Thursday afternoon by a senior official in the Department of Justice to inform them that 80 refugees would be accommodated in Ballaghaderreen for a two-year period.

The hotel is to be used as an emergency reception and orientation centre.

There was some disquiet locally last night at the lack of consultation. While sources who spoke to The Irish Times on condition of anonymity said they supported moves to help refugees from the war in Syria, they expressed surprise at the suddenness of the move.

Some sources said there would be disappointment that the Abbeyfield Hotel would not be reopening as a hotel, given its importance to the local economy. They also expressed concern that local infrastructure such as schools was already under pressure.

“I have nothing negative to say about the refugees,” said one person. “But we would be sorry at the loss of the hotel.” The news also sparked much debate on Facebook when the story was posted on Friday morning, with a mix of humourous, unsavoury and other comments expressing concern about local infrastructure.

A spokesman for the Department of Justice could not be reached Thursday night for a response but The Irish Times has seen the email sent to councillors.

Councillors were told that Ireland has expressed a wish to house families and many of the refugees were expected to be young children.

The chairman of the council, Tony Ward, said that the meeting was to allow councillors to hear from the Department of Justice about the plan and to have their say on it.