Housing 80 Syrians in Ballaghaderreen ‘not a bad news story’

Council chief: ‘This is a good news story for desperate people who are in desperate need’ 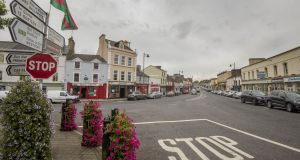 The decision to accommodate 80 Syrian refugees in Ballaghaderreen, Co Roscommon, is “not a bad news story”, the chief executive of Roscommon County Council insisted on Friday.

Eugene Cummins told councillors at a special meeting: “This is a good news story for desperate people who are in desperate need.”

Senior Department of Justice officials told councillors an initial intake of 80 refugees currently based in Greece will be arriving in February, but the premises has capacity for 200 people and could in time cater for this number.

The contract for the accommodation in Ballaghaderreen is for two years, councillors heard.

John Roycroft, programme director with the Irish Refugee Protection programme, said the group was “essentially destitute” and would arrive with nothing more than” the clothes their backs”.

The initial group would also include many children aged under 12.

“They are people like you and me, who had homes, a community, and careers - and it is all gone,” he added.

He said it was intended that each group would spend six months at the Emergency Reception and Orientation Centre (EROC) where they would get an opportunity to acclimatise and get English language classes and other services.

Depending on the availability of housing throughout the country, it was hoped the refugees would be moved out of the EROC and into the community after six months.

Several councillors expressed sympathy for the plight of the refugees who had been caught up in civil war, but many also criticised the lack of consultation and notice, and questioned why Ballaghaderreen had been chosen.

Mr Roycroft told them that expressions of interests for suitable premises had been sought in late 2015, and 90 applications from around the country had been made, many of them unsuitable.

He said that because of delays in the process, only one suitable premises was still available - the former Abbeyfield hotel in Ballaghaderreen. More accommodation was now being sought.

He said security checks had been done on those who would be coming to the Roscommon town.

Cllr Ivan Connaughton (FF) said he had no doubt that Ballaghaderreen would accept the refugees “with open arms”, but said the problem was lack of consultation.

Ballaghaderreen-based Sinn Féin councillor Michael Mulligan said everyone had seen the plight of the refugees, including the footage of a boy dead on a beach - a reference to Alan Kurdi, who drowned in September 2015. “It would melt your heart,” he added.

Cllr Mulligan questioned whether Ballaghaderreen had the capacity to do this, given that it had only two overstretched GPs and schools “packed to the brim”.

Another local councillor, Valerie Byrne, criticised the lack of consultation. “The people of Ireland have never been found wanting. We are top in the world for donating money to charity - and the people of Roscommon will step up to the mark - but it is being done in the wrong way.”

Cllr Liam Callaghan said there had been an expectation locally that the hotel would reopen, but that clearly would not now happen for at least two years.

He said the people of Roscommon would not have any animosity towards the new arrivals, but with the refugees due in four weeks he questioned when local people should have been told.

Cllr Rachel Doherty (FF) acknowledged the harrowing experiences of the refugees but said she was disappointed and frustrated at the lack of consultation.

She said services in Roscommon including health services and mental health facilities were already overstretched.

Cllr Joe Murphy (FF) said it was important to extend the hand of friendship to the new arrivals.

Councillors were told that due to “commercial sensitivity”, the value of the accommodation contract would not be revealed.

Officials estimated that 520 refugees would come via Lebanon to Ireland, with another 800 to 900 coming via Greece. It was also possible that in time up to 600 would come via Italy.

The council chief executive pointed out that no county council resources would be used for the project.

He said it was most unlikely that the refugees would settle in Ballaghaderreen or Roscommon. They were people who needed “to find space, to find a bit of peace and then move on”, said Mr Cummins.

He said the main role of the county would be in providing community support.

He said the refugees were welcome but not in the former hotel. Mr Kelly also criticised the lack of consultation.

“People are very annoyed,” he said. “There may be an odd racist here and there but that is not what this is about.”

The former senator said efforts to boost Ballaghaderreen as a tourist destination under the “lakes and legends” brand would come to nought if the hotel was allocated as refugee accommodation.

“The owner of the hotel also owns 50 houses which have been refurbished and are ready to be occupied. I am saying let them into the houses.”

Fine Gael Senator Maura Hopkins expressed concern that the town of Ballaghaderreen with a population of 2,000 did not have the resources to deal with the number of refugees.

“I am fully supportive of the fact, and Roscommon as well, of playing our part, and making sure that we do our fair share, in terms of supporting these refugees who have been through the most awful of circumstances.

“However, I am very concerned with regards to practical plans and also with regard to capacity for a small local town,” she told RTÉ’s Today with Sean O’ Rourke show.