Syria Civil Defence to be honoured with award in Tipperary 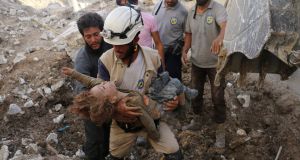 A Syrian Civil Defence (White Helmets) volunteer holds the body of a child after he was pulled from the rubble following a government forces air strike in Aleppo, in October 2016. File photograph: Ameer Alhalbi/AFP/Getty Images

The announcement was made on Thursday by the Tipperary Peace Convention through its honorary secretary Martin Quinn.

The award is “a testament to the enormous bravery and courage shown” by the White Helmets, the convention said in a statement.

The group’s stated mission is “to save the greatest number of lives in the shortest possible time and to minimise further injury and damage to property”.

The White Helmets have saved more than 100,000 people, while 192 of the unarmed volunteers have lost their lives. Responding to news of the selection, a spokesperson for the group said: “We are very happy to receive this peace prize because it means that there are still people around the world who support our mission to protect lives, and that the voices for peace are much stronger than the voices for war.”

The spokesperson added: “On receiving this award it will really motivate all our volunteers to work harder and to continue the work with greater determination.”

The group’s main activities include urban search and rescue missions after bombings, medical and civilian evacuation, and essential service delivery. They also engage in repair works, such as securing damaged buildings and reconnecting electricity and water services.

Raed al-Saleh, head of the White Helmets, said in a statement on their website: “Syrians are killed every day with various kinds of weapons, but the deadliest ones are the barrel bombs because of their indiscriminate nature.”

When these rusty barrels explode (filled with nails and explosives, and rolled out the back of government helicopters), the White Helmets are sent in to search the rubble.

A documentary about the White Helmets was released in September 2015 by Netflix. Directed by Orlando von Einsiedel and produced by Joanna Natasegara, the film won the Documentary (Short Subject) category at the 89th Academy Awards.

The White Helmets are officially an impartial humanitarian NGO with no political affiliation, and are committed to helping anyone in need. The group has international funding through Mayday Rescue, under the stewardship of James Le Mesurier.

The Tipperary Peace Convention was set up in 1983 to promote peace and reconciliation. The first Peace Award in 1984 went to the late Seán MacBride for being a founding member of Amnesty International. Other recipients include Nelson Mandela, Bob Geldof, former president Mary McAleese, and former US president Bill Clinton.

The award will be presented to the White Helmets at a ceremony in Tipperary on September 6th.