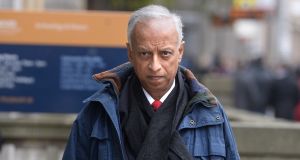 Prof Sir Sabaratnam Arulkumaran, president-elect of the International Federation of Obstetrics & Gynaecology & author of the report on the death of Savita Hallappanavar. Photograph: Dara Mac Dónaill

The Eighth Amendment “played a major role” in the death of Savita Halappanavar during pregnancy, a leading international expert in obstetrics has said.

Prof Sir Sabaratnam Arulkumaran, who chaired the HSE inquiry into Ms Halappanavar’s death in 2012, said it was “very clear” to him Dr Katherine Asbury, the consultant treating her, had been “concerned about the legal issues” throughout her considerations as to whether to terminate the pregnancy.

The professor emeritus in obstetrics and gynaecology at St George’s University, London told the Oireachtas committee on the Eighth Amendment that: “Things were made more difficult because of the legislation.”

The Eighth Amendment, which inserted Article 40.3.3 into the Constitution in 1983, guarantees to protect as far as practicable the equal right to life of the unborn and the mother.

Ms Halappanavar (31) died on October 28th, 2012 at Galway University Hospital, one week after she presented with back pain and was found to be miscarrying her 17-week pregnancy. Although the pregnancy was not viable, her requests for termination were refused because there was a foetal heartbeat. She contracted sepsis and died of multi-organ failure and septic shock.

Prof Arulkumaran said making abortion illegal serves only to promote illegal abortions. “Those women with influence and financial resources will get it performed in a safe environment. Those who are poor with less influence will resort to unsafe methods.”

Dr Peter Boylan, who was an expert witness at Ms Halappanavar’s inquest in April 2013, told the committee the amendment was “unworkable” in modern Ireland.

“It needs to be repealed and you need to legislate.” He said he hoped legislators would be “guided by the recommendations of the Citizen’s Assembly”.

The assembly recommended provision of abortion without question up to 12 weeks’ gestation and that abortion should be provided by the public health system.

Asked what would happen if the committee or the electorate chose not to repeal the Eighth Amendment, Dr Boylan said: “Groundhog day. We would be back. You’ve got to do something.”

He agreed Ireland was a “very safe place to have a baby” but added that, if not for the availability of abortion to Irish women in Britain, the maternal mortality rate here “would shoot up”.

“I would act according to the women’s wishes. If those 4,800 women [that travel yearly to Britain for abortions] can get the same care here that they get in England in Ireland, that would be the best outcome for Ireland.”

Referring to the 14-year prison sentence for any woman or girl who accesses an illegal abortion here, as provided for in the Protection of Life During Pregnancy Act, Sir Arulkumaran asked: “Can you imagine putting those 4,800 women in prison?”

Fine Gael TD Kate O’Connell made an impassioned plea to the committee to “get real” on the issues before it, to “trust women” and “deal with the issue of 5,000 women travelling” regardless of the possible consequences for their parties or their individual careers.

“This idea that you cannot trust women with their own medical decisions . . . I am just getting frustrated at this stage.

“We are trying get an Irish solution to an Irish problem here and I cannot understand why we are shrouding the decisions in, ‘We’ll keep this person happy or that person happy’.