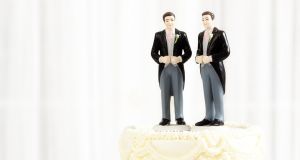 Two male friends, both in their 80s, plan to marry next month to avoid paying inheritance tax when one inherits the older man’s home.

Michael O’Sullivan from Stoneybatter, north Dublin, said he has been friends with Matt for almost 30 years and is now Matt’s carer.

Neither is gay but they have decided getting married is “not a bad idea” to avoid a large tax bill when Matt leaves his north Dublin home to Mr O’Sullivan in his will.

The pair had planned to marry in Cashel, Co Tipperary, on December 22nd but deferred the wedding until January because of concerns over the weather.

Mr McDowell said a prohibition on marriage “by virtue of a relationship of consanguinity or affinity” between two people is described in the 2015 Marriage Act referred to marriage between blood relatives.

It does not apply to others.

He also believed marriages in the past between some older men and younger women “involved no relationship of the physical kind” but was a way of ensuring the young woman could avoid a large tax bill on her inheritance. It might also be the case that the older man was “besotted” he said.

Where older civil servants were concerned it would also mean the young widow would be entitled to a significant pension on his death. This would also now apply to same sex couples since 2015, he said.

Last Friday, Matt (85) told RTÉ’s Liveline Mr O’Sullivan was his best friend and they were marrying “because he will be part of my life when I die and whatever I have, ie my home, there will be no problems, he can have it.”

Capital Acquisitions Tax (Cat) applies to gifts and inherence over specified values. The 33 per cent rate does not apply to gifts or inheritance given to a spouse or civil partner.

Matt said the marriage was a way to avoid this tax. “If he is to pay to look after me in my old age. I thought it was a very good thing that came into my head to say, nowadays, this is official.”

Matt said he had not married and Mr O’Sullivan was divorced with three adult children.“With the house, this is the easiest way,” he said.

Mr O’Sullivan explained he had known Matt for 29 years. Recently “Matt said to me ‘look, I’m going to leave you the house’. I said it’s a nice idea but because of tax reasons I’d have to pay half to the Government.

“But once we are married, I’m his spouse then and if one partner dies, the house automatically goes to the other partner.”

Mr O’Sullivan said his children had no concerns with the decision as they had known Matt a long time. “I love Matt, but not in a sexual way. I’m his carer now and as Matt said to me one day, ‘it isn’t a bad idea’.”

In Ireland illegal marriages usually involved immigrants and are about acquiring Irish/EU citizenship.

More popularly described as “sham marriages” the Immigrant Council of Ireland reported last October that gardaí had interviewed 47 Latvian women who had been trafficked to Ireland solely to enter into a sham marriage with a non-EU citizen.

In another example, a 17-year-old Slovak girl was trafficked into Ireland after her brother sold her for €300 in order for her to be married to an older man. The girl was rescued and received support from Tusla. Three suspects were arrested in the case.

Last January it was reported that Irish authorities believed a significant number of sham marriages had taken place in the Republic from early 2013. A multi-agency day of action, involving Garda searches and arrests, was carried out in November 2015.

It was estimate at the time that about 20 sham marriages were conducted per week for around a year. Gardaí believed around half of the marriages in Ireland in the 2½ year period to the middle of 2015 were bogus; motivated not by immigration status.

It meant that well over 1,000 men, almost all Asian, paid between €15,000 and €20,000 each to criminals who arranged their marriage in Ireland to European women they had never met before.

More than 100 people found to have been involved in the scam were deported and marriage proven to be a sham were revoked.