Gaelic Voices for Change see players in Ireland, US and Canada show solidarity with homeless 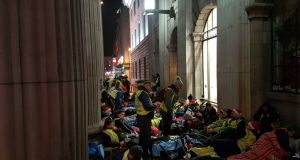 Hundreds of GAA players from around the country and abroad participated in a sleep-out this weekend raising about €200,000 for homeless charities.

Organised by the newly-established Gaelic Voices for Change group, there were sleep-outs on Saturday night by hundreds of GAA hurlers, footballers, and camogie players in Dublin, Cork, Limerick, Galway, Sligo, Belfast, Carlow, Naas, Boston, New York, with one player who wished to remain anonymous sleeping out in Quebec.

To date, the Gaelic Voices for Change group has raised over €200,000 for homelessness charities.

In an address at the GPO on Saturday where over 100 GAA players took part in a sleep-out from 6pm to 6am, campaigner Fr Peter McVerry said that “15 people are becoming homeless every day and between 80 and 90 families every month.”

Fr McVerry called for a ban on evictions in Ireland, describing it as a throwback to what happened in Ireland during the famine more than 150 years ago.

“It’s what we did during the Famine, we evicted families onto the streets because they could not afford to pay the rent and we’re still doing that today in the fourteenth wealthiest country in the world and the fastest growing economy in the EU,” he said.

Since the Government’s homelessness plan was introduced 15 months ago “the number of homeless has gone up every single month,” he said.

The plan had failed, he said, and he called on the Government “to introduce a housing and a homelessness emergency” which would “bring all the actors around the table” instead of having them “working in their own silos with very little co-operation or co-ordination between them.”

Fr McVerry thanked the GAA players taking part in sleep-outs throughout the island of Ireland and abroad and and hoped the association would add its voice to his call for a national housing and homelessness emergency.

“I hope tonight will be the beginning of something, not the end”, where the GAA and the issue was concerned, he said. Fr McVerry urged players to “put pressure on Government politicians to act more effectively” on the issue.

He thanked players for the money raised for the Peter McVerry Trust as well as other homelessness organisations, and said the Trust housed 1,000 homeless people last night with over 100 more to be housed before Christmas and 24 in family hubs. “You are making a huge contribution,” he said.

Council of State member Ruairí McKiernan, who had been assisting the Gaelic Voices for Change, said the new group would be meet soon to review Saturday night’s events and see where to take matters from there.