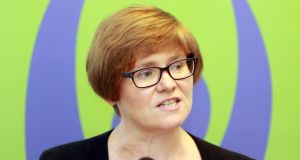 Orla O’Connor, director of the National Women’s Council of Ireland: “Ireland must hold a referendum to remove the Eighth Amendment . . . and introduce legislation . . . This must include the removal of all criminal sanctions on women.” Photograph: Nick Bradshaw

The State should not make decisions about individuals’ sexual and reproductive health, the United Nations High Commissioner for Human Rights has said.

Zeid bin Ra’ad, who was in Dublin on Monday, said he could not comment on a case in which a girl who was deemed to be suicidal and wanted an abortion was detained in a psychiatric unit, as he did not know the details. But he said it appeared “problematic”.

In the case, which was before the courts last year, the girl was detained under the Mental Health Act because her psychiatrist said that while she was suicidal as a result of the pregnancy, an abortion was “not the solution”. Ultimately, following the appointment of a guardian ad litem and an assessment by a second psychiatrist that she was not mentally ill, the court ordered that she could be discharged from the unit.

Mr bin Ra’ad said: “From a human rights perspective . . . the idea that a society makes decisions for an individual, that only they [society] should be in a position to make those sorts of decisions, it’s problematic. Each decision could have a long-life impact on the individual. Each case is different. The State shouldn’t be making those decisions because each case is unique, each one of us is unique.”

Amnesty International said “urgent answers to serious questions” were necessary. The case underlined how “inadequate” and “unclear” the 2013 Protection of Life During Pregnancy Act was “in ensuring timely and practical access to abortion where there is a risk to a pregnant girl’s life.

“This alarming case also highlights why any reform of Ireland’s abortion laws must avoid the barriers that grounds-based legislation brings.”

“Ireland must hold a referendum to remove the Eighth Amendment . . . and introduce legislation in line with the vast majority of development countries around the world. This must include the removal of all criminal sanctions on women.”

Perinatal psychiatrist Prof Veronica O’Keane said accessing an abortion under the Act could be “arduous” and a “lottery” dependent on the psychiatrist to whom the woman or girl was referred .

Former minister for health James Reilly, one of the architects of the Act, said the public needed to be reassured that matters had been handled appropriately. “I’m deeply disturbed on the surface of it at what has happened here. We have to be sure that the procedures laid down by the Act were followed, ” Dr Reilly said.

The case was covered in the latest round of the Child Care Law Reporting Project directed by Dr Carol Coulter. “Speaking personally, I would be concerned if young people who sought medical assistance when they were pregnant and suicidal would face detention as a result,” Dr Coulter said.