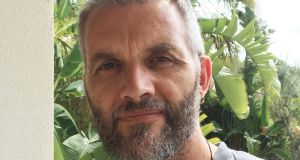 Dubliner Jon Berkeley: “We have grown-up kids and obviously they would be out and about in Barcelona quite a bit” 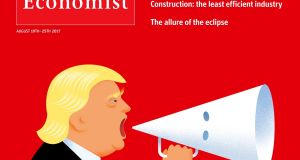 Dubliner Jon Berkeley’s latest “Economist” illustration: “I have certainly have had more reaction to this cover than anything I’ve done before,” he says

On Thursday Jon Berkeley found himself at the nexus of world events. The Dubliner’s latest illustration for the Economist was going viral. The already iconic cover shows US president Donald Trump using a Ku Klux Klan hat as a megaphone.

“I have certainly have had more reaction to this cover than anything I’ve done before. It’s been shared over 30,000 times online the last time I checked. It’s been featured on the all the major news channels in the US and in the Washington Post and various other papers,” Berkeley says from his home in the hills surrounding Barcelona.

Since graduating from Dublin’s NCAD he has done more than 150 covers for the Economist and hundreds more for other publications.

The reaction has been almost universally positive. Almost.

“I’ve had very little negative reaction but there is some in the comments section of news articles and especially on the Economist Facebook page.

“There’s nothing new. The diehard Trump supporters are foaming at the mouth and saying ‘it’s liberal bias’ and ‘what about Isis’ and blah, blah, blah and other not very relevant things.

“The divisions seem as great as ever. There don’t appear to be many people in the middle. There’s a lot of bile. There’s an awful lot of spit and fire. It seems to be the Trump supporters are feeling increasingly cornered.”

Berkeley’s designed the cover in a matter of days following Mr Trump’s defence of a white supremacist protest in Charlottesville, Virginia, during which a young anti-racism protester was run down and killed by a white supremacist.

In a depressing coincidence, just as his illustration was being spread around the world, another terrorist was carrying out a similar attack just miles from Berkeley’s home. This one would kill 13 people and injure more than 120, including an Irish family of four.

“I’ve lived here 20 years. It was shocking for us. We have grown-up kids and obviously they would be out and about in Barcelona quite a bit,” Berkeley says.

“A lot of the police searches were going on in the town right beside us.”

Berkeley is one of hundreds of Irish people living in Barcelona. It’s difficult to get accurate figure as the population is so transient. There are those, like Berkeley, who had been here for decades but there are also the Erasmus students here for a few months. Added to that are the huge number of Irish tourists who throng the city’s streets during the summer months.

“The numbers of Irish here went through the floor in 2011 and 2012 during the economic crisis,” says Donal Quinn, the organiser of the Irish in Barcelona group.

“You’d have the ‘Swim’ couples [Spanish Woman, Irish Man] which are 90 per cent of the people I know here. They all left. Anyone who wasn’t really settled here left.”

But in the past few years the Irish have been returning in large numbers and the culture has penetrated deep.

There are three GAA teams in and around Barcelona. One of them doesn’t even have any Irish people on it; it’s comprised of people from Galicia in northwestern Spain. The picked up the sport while working in Ireland and those that moved to Barcelona set up a team here.

There’s also the Mediterranean Currach Regatta that takes place every St Patrick’s Day. The currachs are built in the traditional Irish style by Barcelona based artist Mark Reddan.

“Each of the pubs put in a team. That gets the crowds. And then everyone goes drinking,” Quinn says.

One source of concern among the community here is the growing anti-tourist feeling the city. As well as the anti-tourism marches, graffiti has been popping up around the city saying things such as “Tourism is Terrorism”.

For the settled Irish community there’s a feeling they are being unfairly put in the same category as the drunken stag and hen parties that roam the streets during the summer months. However, Quinn has some sympathy for the protesters.

“At the end of the day, there is a point to the whole anti-tourism thing. The rents have gone crazy but the rents are also going up here because the economy is recovering and nothing has been built in the city for the last five years, just like Dublin.”

He says the anti-tourism groups, such as the radical Popular Unity Candidacy party, now seem to more concerned with the inevitable wave of anti-immigration and Islamophobia protests that will follow Thursday’s attacks.

“They’re focused on the anti-fascist angle and that sort of thing which is more productive. Tourists are an easy target and it’s easy to tar them all with the same brush but hopefully now they’ll focus on the real problems.”