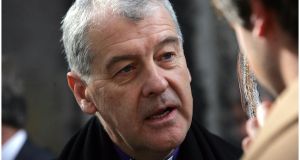 It would be hugely ironic for an Ireland “that pushes relentlessly a secular agenda” to ignore the remarkable diversity among its people today “simply and precisely because such diversity wears a religious smile,” Church of Ireland Archbishop of Dublin Michael Jackson has said.

It was a fact that “many people who are Irish and have come from outside Ireland have brought with them as heritage and as gift the combination of culture and faith that is their identity,” he said in his Easter sermon at Dublin’s Christ Church Cathedral today.

Civic engagement which takes account of religious and non-religious stakeholders in Irish society was essential to the public interest and to building a trusted democracy, he said.

Archbishop Jackson wondered whether a Citizen’s Assembly might not have a role in this. He asked “might it not be a place for people of faith and people of society together to discuss the future of public interest?”

He said it “could lead us right into two things that currently are at loggerheads in Ireland and neither of them is going away anywhere soon: secular policy and religious belonging”.

“The impression that we are given increasingly is that religious belonging should have taken itself off long ago in order to leave the adults to get on with the real work,” he said.

Religion in Ireland now was “a much bigger and wider concept” than “the inherited and all too easily dismissed binary divisions internal to Christianity and between Catholic and Protestant,” he said.

“The public interest needs to give voice to real things beyond budgetary provision and number crunching and discontent. It needs to address ‘public wellbeing’ and ‘private happiness’ and the provision of both,” he said.

His own belief was that “the language of church/state is insufficient, partial, inadequate and outmoded in contemporary Ireland.” It would be “incorrect”, in his view, “for such dialogue to be a dialogue about church/state relations alone.”

Whatever the history, there remained “an active spiritual and religious sense in the majority of Irish people” and “there are new spiritual awarenesses and awakenings”, he said.

“The diversity of faiths needs to be integral to the new dialogue in Ireland as elsewhere in the world,” he said. “Our challenge is the hard work of pulling together, with all stakeholders and policymakers, secular, religious and political”, those areas “ that can and do still divide us beyond a working, cherished diversity,” he said.