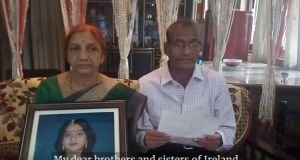 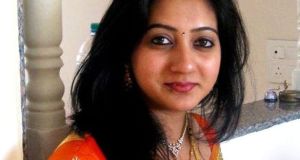 The father of Savita Halappanavar has urged the public to remember his daughter and vote Yes in the upcoming abortion referendum this Friday.

Ms Halappanavar, a 31-year-old dentist , died at University Hospital Galway in 2012 after a septic miscarriage.

Voters will be asked on May 25th whether to remove Article 40.3.3, which gives the unborn and the mother an equal right to life, and for the regulation of the termination of pregnancy.

In the one minute 15 second video message, Andanappa Yalagi sits with his wife Mahadevi who holds a portrait of their daughter, at their home in Belgaum, Karnataka in south west India. Mr Yalagi reads out a message to his, “dear brothers and sisters of Ireland”.

“I am Savita’s unfortunate father Andanappa, speaking on the historic event of repeal of the Eighth Amendment.”

He said no family should have to endure the pain and suffering their’s has since Ms Halappanavar died, in Galway University Hospital on October 28th 2012. They still feel “worry and the sorrow” six years on, he said.

“The life that Savita had, she had a very long life to lead but it was cut down mercilessly there. Savita loved the people of Ireland. Lots of people there say that Savita’s death hurt the entire Irish society.”

He says she had a long life ahead of her but that it was “cut down”.

“I strongly feel that the younger daughters of Ireland should not have the fate of Savita. I hope the people of Ireland will remember the fate of our daughter Savita on the day of the referendum and vote Yes, so that what happened to us won’t happen to any families.

“And by the doing this you will be paying a great debt to the departed soul. Thanking you very much.”

Mr Yalagi had previously called for a Yes vote , in April. When contacted by The Irish Times the retired engineer said he had not known at that point about the upcoming referendum.

Ms Halappanavar was 17 weeks pregnant when she died, a week after coming to hospital with severe back pain.

She was found to be miscarrying. Her requests for an abortion were turned down because doctors could still detect a foetal heartbeat. Her condition deteriorated over the following days, and she went into septic shock with multiple organ failure.

Three inquiries identified serious lapses in Ms Halappanavar’s care, including delays in blood-test results, failures of communication between doctors about her deterioration, and failure to recognise sepsis.

A Health Service Executive investigation chaired by Prof Sir Sabaratnam Arulkumaran noted: “International best practice includes expediting delivery” – that is, by terminating the pregnancy – “in this clinical situation of an inevitable miscarriage at 17 weeks . . . and infection in the uterus because of the risk to the mother.”

In April Mr Yalagi said he wanted Savita’s image used by those campaigning for a Yes vote.

“Of course. It should be shown. The rules in Ireland about abortion should change” he said.

Meanwhile, two opinion polls released by the Sunday Business Post and Sunday Times newspapers on Sunday showed support for the Yes side still leading the polls but the gap has narrowed.

The Sunday Business Post/Red C poll on the Eighth Amendment referendum showed 14 per cent still answered “don’t know” on how they will vote on Friday. Voters were asked in the poll which side they believed would win, and the result was 44 per cent for No and 56 per cent for Yes.

Dr Ruth Cullen of the Love Both campaign, which urges the public to vote No, said the polls show a “significant proportion” of voters undecided.

“The figures show that there remains serious concern about the details of the Government’s planned abortion legislation,” she said.

“In recent referenda we have seen significant shifts over the last week of campaigning and we are confident that when the Irish people hear just how extreme the Government’s planned abortion legislation is, they will reject the plan to introduce abortion on demand into Ireland.”

In the final Irish Times/Ipsos MRBI opinion poll of the campaign published last Thursday the figures showed the Yes side retained a clear advantage in the abortion referendum campaign, but its lead has reduced sharply in the last month.