‘I needed surgery but because I was pregnant, I was left to rot’

Kate Campbell developed a cyst and was in constant pain, but doctors refused to test or operate 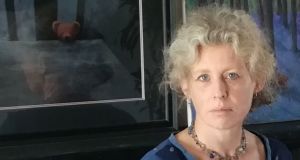 ‘In a different juristiction I would have been operated on mid-trimester with minimal risk to a foetus, but the Eighth Amendment meant no doctor could intervene until such time as I faced a real and immediate risk of death.’

There are many different reasons women terminate their pregnancies, or continue with them in challenging circumstances. In advance of the referendum on whether to retain or repeal the Eighth Amendment on May 25th, The Irish Times has asked readers to share their personal experiences. This is one of the stories we received.

I needed surgery but because I was pregnant, I was left to rot instead.

When I was three months pregnant with my third child in 2007 I found a lump in my abdomen about the size of a pear. I was referred to my local hospital as my GP was unable to diagnose using palpitation alone. At the hospital I was examined but the only diagnostic tool offered was an ultrasound, where I was told the baby was fine and the lump was 7cm across.

I spoke to the consultant and asked for further tests as I still had no diagnosis, no idea what this lump was. I asked for an MRI but was (incorrectly) told that this was “harmful to baby”. I asked for a biopsy to be taken but, despite my insistence that it would be easy to perform this without risk to a foetus, I was refused.

My pregnancy grew and the lump grew.

I was in constant pain from about 34 weeks into the pregnancy and was admitted to hospital but no diagnostics or treatment were offered. The only medical care I received was 24 hours of pethidine and an ultrasound, which was begrudgingly carried out before I was discharged the following day. I asked for tests, I asked to be induced, but was refused on numerous occasions, even on my due date. I finally went into spontaneous labour two weeks past my due date, and gave birth to a healthy baby without any complications.

The pain in my side eased to a steady grumble, possibly because the lump was no longer being pressed up into my liver.

Two weeks after the birth, I woke in the middle of the night with indescribable pain, pain that made childbirth look like a walk in the park, pain so extreme that I could only grind my teeth and make animal noises. A doctor was called and I was ambulanced into hospital.

I had emergency surgery and was told by the surgeon that I was “a very lucky woman”. When I asked what they removed he told me that they didn’t know as there was no recognisable tissue, only a gangrenous mess, so a sample had to be sent to histology before they would know for sure. The lump had twisted on itself, probably when the pain started at 34 weeks, had cut off its own blood supply, and had necrotised for weeks. It had adhered to my ovary and my abdominal wall. The fallopian tube had then collapsed causing the second wave of pain. All affected tissue had had to be removed. I had been only a step away from sepsis.

Histology results showed an ovarian cyst was at the root of the problem. In a different juristiction I would have been operated on mid-trimester with minimal risk to a foetus, but the Eighth Amendment meant no doctor could intervene until such time as I faced a real and immediate risk of death. A real threat to my health was OK, a real but not immediate threat to my life was also OK.

Is it really permissable to refuse a woman standard medical care, to leave her in horrendous and constant pain for weeks, and to develop gangrene?

Under the current legislation it is.

Roughly 65,000 women a year access maternity services in Ireland. The Eighth Amendment affects every one of them, not merely those who need access to safe abortion. All pregnant women are stripped of their rights to informed consent and informed refusal of medical procedures from the moment they conceive. They are no longer given the same access to treatment or diagnostics as the rest of the population. In the labour ward they are routinely subjected to procedures and interventions that go against best practice (artificial rupture of membranes and episiotomy, for example).

This is so much more than an abortion referendum, it is a healthcare referendum, an equality referendum and a human rights referendum.

As a parting gesture I would like the reader to imagine a nice fresh piece of meat the size and shape of a large grapefruit. Now imagine that you are forced to carry it around, in your underwear say, day and night, for nine to 10 weeks at a nice 37 degrees Celsius.

I never wanted an abortion, I wanted treatment. I got gangrene instead.