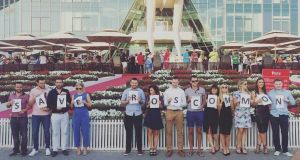 Members of the Save Roscommon campaign. 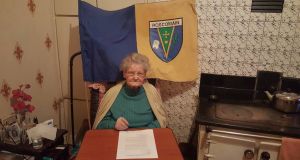 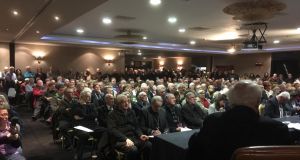 A meeting on the proposed boundary change between Westmeath and Roscommon.

On a map, the 30 sq km of Roscommon that is being proposed as an addition to Westmeath looks like a square wedge marked off by one of those colonial lines used by 19th-century Europeans to carve up Africa.

Back then, imperialist decisions were taken without reference to the ties, customs and loyalties of indigenous populations.

The result, in some instances, was tribal warfare.

The language in Roscommon is no less incendiary. Independent TD Denis Naughten has spoken of a “set of ‘invaders’ marching from Mullingar . . . to take over the economic heart of Co Roscommon – and we have to stop them.”

Following the decision of Westmeath County Council last Monday to back this extension of its boundary into Roscommon, ill feeling, at least, seems inevitable. Rarely has the mood in Roscommon been as unanimous.

Even more rarely, politicians are united. Even the explosive county hospital issue did not bring people and politicians in the county together in the way that the proposed boundary revision has managed.

The Department of the Environment has recommended that the southern end of Roscommon should lose 30 sq km to Westmeath, arguing this would make it easier to manage the needs of a growing Athlone.

The area around Monksland has been developed by Roscommon County Council over many decades, and at the expense of other disadvantaged parts of the county.

Today, it is a highly successful location for pharma and food firms, including Alkermes (formerly Elan), Arran, Sidero, Jazz Pharmaceuticals and Carty Meats. 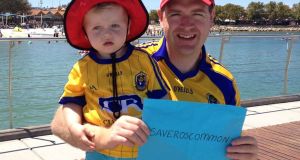 In pictures: Emigrants send #SaveRoscommon messages from around the world

The area is worth €2.5 million a year in rates and taxes to a local authority that struggles to maintain its commercial rates base.

Meanwhile, there are concerns – highly emotive ones, too – about the future of two of the most successful GAA clubs in Connacht and Ireland, Clann na nGael and St Brigid’s, if some of their hinterland disappears into Westmeath.

Both clubs are passionately supported, and St Brigid’s were All-Ireland club champions as recently as 2013.

Such passion has migrated to social media, with Roscommon’s young diaspora putting up “Save Roscommon”’ postings from as far away as Paraguay, Abu Dhabi, New York and Australia.

The message has even got to Hollywood. Boyle actor Chris O’Dowd, in Los Angeles, responded to the Department of the Environment’s move on January 17th last by tweeting: “They’re trying to do WHAT?!”

So far, 5,000 have made submissions to the boundary review commission.

Last June, Minister for the Environment Alan Kelly set up a statutory committee to review local government boundaries in Athlone, to make its recommendations by February 29th.

Brig Gen Aherne told The Irish Times that economic, social and other links “going back generations” would be affected by the department’s proposal.

“The closest big town to us here in south Roscommon is Athlone,” he said. “Our kids have gone to school in Athlone, they socialise in Athlone.

A phenomenal number of people who live in south Roscommon work in Athlone.

“We’ve a certain warmth towards the town of Athlone, and because of the clumsy and unnecessary means by which they are going about this, it runs the risk of fracturing that relationship in perpetuity.”

Paddy Kenny, retired county engineer in the area for 35 years, said Monksland was “the fastest-growing town in Roscommon and is the second-largest.

This issue may yet have an impact on national politics. Local Independent TDs Denis Naughten and Michael Fitzmaurice are both strongly opposed.

Labour’s Senator John Kelly has threatened not to stand as a party candidate in the general election if Kelly does not “take this off the table”.

He said: “I have spoken to Joan Burton, and she is fully supportive of my stance.”

The Fine Gael general election candidate in Roscommon-East Galway, Maura Hopkins, said she would oppose any Government decision to redraw the boundary between Roscommon and Westmeath.