Riot of colour as thousands turn out for Dublin Pride

Tens of thousands of people take to the streets of Dublin as part of the Pride parade 2017. Video: Dan Lloyd 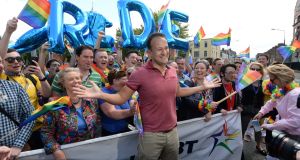 Stephen’s Green was a riot of glitterbeards, rainbow facepaint and all manner of colourful costumes as thousands thronged the city centre for the annual Dublin Pride parade on Saturday.

The pinnacle of a week-long schedule of events in the capital in celebration of its LGBT+ population, the weather mercifully held out for the afternoon as legions of proud participants marched through the Liberties, past Christ Church and into Smithfield for the culminating Pride Party.

However, one particularly prominent guest-speaker at the pre-parade rally on Stephen’s Green was less than enthused by the changed route this year, which was necessitated due to the ongoing Luas Cross City works on O’Connell Street.

“We’re not the backstreet girls and the backstreet boys. It’s like telling Patrick Pearse in Easter 1916 ‘forget about the GPO, use Sandymount Post Office instead’, and next year we’re not taking it!”

The veteran politician congratulated Leo Varadkar whom he referred to as “our proud gay Taoiseach”, and on a more sombre note he paid tribute to the recently deceased equality activist Dr Ann Louise Gilligan, who was the wife of Minister for Children and Youth Affairs Katherine Zappone.

Mr Norris described Dr Gilligan as a “gentle, lovable woman”, while parade grand marshal and BeLonG To executive director Moninne Griffith remarked that she was an “icon” for the wider LGBT+ community.

‘Find Your Inner Hero’ was the designated theme for this year’s festivities, and corporate entities in particular were happy to champion the cause of LGBT+ rights with imaginative floats on display from companies such as Facebook, Google, Salesforce, Dublin Bus, Sky and Eir.

Also conspicuous was the presence of banners calling for the Eighth Amendment of the Constitution, which affords equal protection to the life of the mother and the unborn, to be repealed.

In her concluding speech ahead of the parade, feminist academic and self-proclaimed “proud, out dyke” Ailbhe Smyth said the movements for LGBT+ rights and for reproductive rights have faced a common opposition.

A survey conducted on behalf of the Department of Children and Youth Affairs prior to this year’s pride parade found that a fifth of LGBT+ respondents continue to face bullying and harassment in public places, an issue touched on by Union of Students in Ireland representative Siona Cahill.

“We still don’t have access to PrEP [HIV prevention], we are bullied in our schools, we’re called names on the street and at ATMs late at night. We’re conscious of holding hands and coming out to our GAA teams,” she said, while also highlighting the social isolation faced by LGBT+ individuals in rural Ireland.

Taking part in their first Dublin Pride parade as a couple, Tiago Silva from Brazil and Alan O’Connor from Cork were impressed with the surrounding revelry.

“It’s amazing to see so many people out with such colour and spectacle. It’s nice that people can bring their kids to an event like this,” observed Mr O’Connor.

“Since marriage equality I think that everyone who thought that Ireland didn’t really appreciate their gayness felt a lot freer, they felt they didn’t have to hide in the shadows, didn’t have to watch the parade from the sidelines and can get into it now,” he added.

Taking a moment from corralling his colleagues from Indeed. com into their parade slot, Nathan Barber from Dublin shared an anecdote from a co-worker which he believes typifies a new inclusive attitude.

“I spoke to a colleague recently who is over from Germany. I think he said ‘for the last 40 years I’ve tolerated people from other backgrounds’, but now he says he’s here joining in and he’s happy to take part,” he said.

Identifying areas where progress is still to be made, Amanda Purneen from Cabinteely said sex education in schools needs to be “more inclusive and not such a heterosexual version of sex education”.

Mr Varadkar made history by becoming the first Taoiseach to actively participate in a Pride march, and took the opportunity to address crowds at a finishing party in Smithfield.

The Fine Gael leader also signalled an intention to support the cause of marriage equality in Northern Ireland, highlighting the fact that citizens North of the Border “do not have the same rights as we do” in that regard.