School threatens action against Brothers over sale of pitches 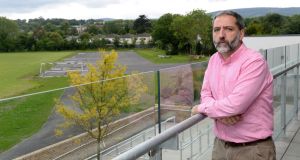 Edward Melly, principal of Clonkeen College, Blackrock, Co Dublin, with view of school grounds which are to be sold by the Christian Brothers. Photograph: Dara Mac Dónaill

A south Dublin secondary school is threatening legal proceedings against its founders, the Congregation of Christian Brothers, to stop the sale of 7.5 acres of playing fields.

Solicitors representing the board of Clonkeen College in Deansgrange say the lands “constitute an intrinsic and essential element of the life of the school and its ability to cater for the education needs, sporting and intellectual” of its 520 pupils.

If the congregation does not, by July 3rd, honour an agreement the school says was made in 2006, that the fields would not be sold, High Court legal proceedings will be issued “without any further notice”.

It emerged earlier this month the school had been told on May 3rd a “legally binding” contract had been entered into with local homebuilder Patrick Durkan snr, to sell the playing fields for a reported €18 million. Negotiations for the sale had been ongoing for 12 months, without the school’s knowledge. *

In a 12-page letter, copied to six others including the Minister for Education, Richard Bruton, the builders, and the Charities Regulator, the school’s solicitors, Beauchamps, say no sale can take place as any “sale agreement ignores our clients’ rights to and interest in the lands”, adding these will be vindicated “by way of High Court proceedings against the congregation” if necessary.

The letter gives a detailed account of a meeting in 2006 between the school board and Christian Brothers Dan O’Keeffe and Michael Murray at which, the school says, it was assured lands they planned to sell then “would be the last area” that would be taken from the school “for as long as the school remained a school”.

It says “an enormous” sum has been spent upgrading the fields “with the full knowledge, consent and encouragement of the congregation”.

The Christian Brothers say the sale is necessary to discharge their debt of €10 million to the redress board (for historical abuse of children who had been in their care) and for the future support of ageing brothers.

The sale was “not an easy decision” but was taken having made very substantial provision for the college’s reasonable future needs, they add.

* This article was edited on June 27th.