Increase to €21.60 a week to those in direct provision called ‘offensively miniscule’ 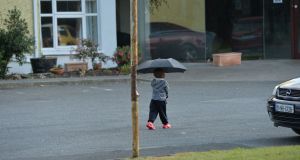 Allowance for those in direct provision to increase by €6 a week for children and by €2.50 for adults. Photograph: Alan Betson

An increase in the direct provision allowance to €21.60 a week for adults and children is “offensively minuscule” and shows “no understanding whatsoever” of the lives of those dependent on it, asylum seekers and several groups representing them have said.

Some others, however, welcomed the increase as a step in the right direction.

The Movement of Asylum Seekers in Ireland (MASI) and the Irish Refugee Council were critical of the announcement on Wednesday, by minister for justice Frances Fitzgerald and Taoiseach Leo Varadkar, that the allowance would increase by €6 a week for children and by €2.50 for adults.

Some 4,652 people were living in direct provision centres across the State in May, the most recent data, about one third of them children.

Direct provision was established in 2000 and sees asylum seekers accommodated in centres where they are provided with meals and a weekly allowance. Though children attend school, adults may not work.

Mr Varadkar said: “The Tánaiste and I believe this is an important measure. The increases will benefit everyone living within the direct provision system by providing more disposable income.”

The direct provision allowance was introduced with the system, at a weekly rate of IR£15 (€19.10) per adult and IR£7.50 (€9.60) per child. The adult rate has remained unchanged since, though the child rate was increased in January 2016 to €15.60. The increases will be from August.

In 2015 a cross-departmental working group, chaired by retired judge, Bryan McMahon, recommended increases to €38.74 for adults and €29.80 for children

“We really feel insulted by the newly-elected Taoiseach, who seems to have no understanding whatsoever about what we have gone through in direct provision for 17 years.

“The Taoiseach said that these offensively minuscule increases would give asylum seekers more disposable income. If our situation wasn’t so serious this would be a joke. We were not consulted on this, no one asked us what we needed. We are furious that people think that €2.50 or €6 will do anything to address the damage caused to our lives by direct provision.

“The answer to our problems is not an increase to our allowance. It is allowing us the right to work. We have been living below the poverty line for so long, denied this basic right.”

The Irish Refugee Council welcomed the “modest” increase but said it was not enough.

The council’s chief executive, Nick Henderson, said the increase, “the first ever for adults, and the second for children since 2000”, was “still hugely insufficient and is also below the modest recommendations of the McMahon report.

The society of St Vincent de Paul however welcomed the increases.

“While there is still some way to go . . . the increases are moving in the right direction and we hope that Budget 2018 will bring further increases to the levels we have sought,” said the organisations national president, Kieran Stafford.

The Children’s Rights Alliance also welcomed the measure saying it as a major breakthrough for the most vulnerable groups of children. Chief executive Tanya Ward said she hoped this was a proactive step by the new Taoiseach.