Maynooth seminary to be overhauled after turbulent period 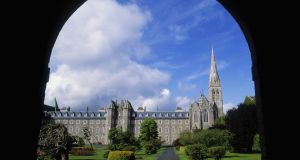 Diarmuid Martin, said he was no longer going to send seminarians to St Patrick’s College because of “poisonous” atmosphere. Photograph: Getty

In time, a rector will be appointed to oversee the seminary with a separate office of president appointed to run the associated university.

Last August the college had been at the centre of controversy when it emerged the Archbishop of Dublin, Diarmuid Martin, said he was no longer going to send seminarians there because of its “poisonous” atmosphere. He said students were accessing gay dating apps and anonymous letters were being circulated accusing seminarians of misconduct.

Making the announcement today, Catholic primate Archbishop Eamon Martin said he and fellow bishop-trustees at the college had agreed to revise the governance structures, “with particular reference to the seminary and the Pontifical University as two inter-related but distinct entities”.

Plans for the further development “have led us to reflect on the complementary but distinct roles and responsibilities of a seminary rector and the president of a Pontifical University. We have therefore decided to prepare for the appointment in due course of a pro-rector with dedicated responsibility for seminary formation at Maynooth,” he said.

Archbishop Martin also announced that Fr Tom Surlis will succeed Fr Paul Prior as director of formation at Maynooth from September next. Until recently Fr Surlis had been president at St Nathy’s College, Ballaghaderreen, Co Roscommon. This week it was announced that Declan Dunne, deputy principal at St Nathy’s for many years, had been appointed its first lay principal.

Archbishop Martin thanked former president at Maynooth Msgr Hugh Connolly for his “dedication and commitment to the staff and community of St Patrick’s College over 20 years, including two full terms as president” and expressed “appreciation and gratitude to Fr Prior at the end of his two full terms as director of formation.”

The current trustees of St Patrick’s College are Ireland’s four Catholic Archbishops together with 13 other bishops.