Residents told to leave unsafe buildings ‘have nowhere to go’

About 60 people, including families with children, have been ordered to vacate Dublin city properties

Residents of 100, 101 and 104 Seville Place in Dublin 1 have been ordered to immediately leave the three city-centre buildings due to fire safety concerns. Video: Colm Keena 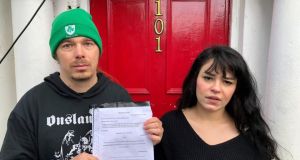 About 60 people say they have nowhere to go after the buildings where they had been living in Dublin were condemned as unsafe.

The residents, who have been told the leave the buildings immediately, include a number of families and children.

The High Court granted an order to Dublin City Council on Thursday that 100, 101 and 104 Seville Place, Dublin 1, should be vacated immediately for fire safety reasons.

Grant Thornton was appointed receiver over the properties by AIB in October 2017, the High Court was told. It is understood no rent has been collected since at the properties.

Limonica Serban said she had been living in number 100 for nine years and has seven children. She was one of a number of Roma people gathered outside the buildings on Friday morning.

When asked where the family would go now, her daughter Andrea Serban (14), translating for her mother, said they did not know.

“I live here in this flat for eight years, since 2011,” said Tudor Manciu, who lives in the same building. “And last night [THEY CAME]and said we need to leave. But don’t give any time, nothing. Just left some paper on the door, said its dangerous, for people. Just this. I don’t know what I have to do now. I don’t know where I have to go.”

Ginger Wroblewski, from Brazil, who has been living in 101 for six years with her husband, Marcos, said the residents of her building had been trying to get Grant Thorton to take rent from them for the past two years, even since a receiver was appointed to the property of the former landlords, Vincent and Catherine Donoghue.

“Grant Thornton never answered me back,” she said. Anxious that she might lose her flat, she approached the Citizens Advice Bureau and others looking for help, but got nowhere, she said.

A month ago, the council inspected the buildings and they were told they were “very dangerous”. However she said she believed 101 was not as bad as 100 and 104, which had been allowed fall into a greater state of disrepair.

Although they have been told by Grant Thornton they can go to a court hearing on Monday and make their case, they have also been told they must immediately vacate the building.

“We have nowhere else to go. That is the biggest problem. I’m trying desperately to find somewhere else to live,” Ms Wroblewski said.

The three, three-storey over basement houses, which are just off Amiens Street, close to the Five Lamps, are in very bad repair, particularly 100 and 104, with rubbish in the front and back yards.

The High Court was told that there were problems with rats, cockroaches and damp. It was also alleged that the carcass of a dead pig was brought into one of the buildings by people living in one of the units.

During a visit to numbers 100 and 104 by The Irish Times rubbish could be seen strewn in the back yards, including on the spiral fire escape at the back of 104. The stairways and walls were in poor repair, although the interiors of people’s flats appeared to be in better condition.

A spokeswoman for Dublin City Council said the residents were contacted a number of weeks ago and advised to contact the council. “Those that presented were advised individually of their housing options,” she said.

A spokeswoman for Grant Thornton said she had no comment.