Priests turn to suicide as workload and isolation increase 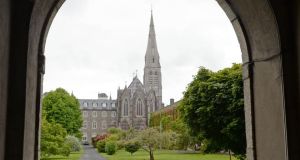 Maynooth University. Vocations to the priesthood have undergone what the Association of Catholic Priests describes as a catastrophic decline in recent years. Photograph: Eric Luke

The lot of the Irish Catholic priest today is probably at its most difficult since Catholic Emancipation in 1829.

Over recent months a series of regional meetings organised by the Association of Catholic Priests (ACP) has been attended by priests from dioceses throughout the island.

Each meeting has heard similar stories of an ageing cohort of clergy struggling with isolation, dropping income, an increasing workload, mental health issues and an overriding sense of futility. This latter is inspired by knowledge that an older, 19th-century model of church is disappearing with no indication yet as to what the future will bring.

Yet it still came as a shock to many to hear that as many as eight Irish priests have died by suicide over the past decade, as those regional meetings were told by members of the association’s leadership team.

One of that team is Fr Tim Hazelwood, parish priest at Killeagh in rural Co Cork. At 58, he is towards the younger end of Catholic clergy in Ireland, whose average age now is approaching 70.

He recalled that another feature of the ACP regional meetings was the sense of futility on the part of priests at “upholding the past as more and more work was piled on”.

He remembered a priest in his 40s at one meeting remarking how he dreaded to hear people say “you have great ability/are a great worker” as it would mean he “could be loaded with three or four more parishes”.

And all this in a context “where the future is not known yet and few dioceses have had any dialogue about it with priests and laity, apart from the synod in Limerick,” he said.

He quoted association colleague Fr Brendan Hoban, who wrote recently that three Irish bishops have acknowledged what the ACP has been saying for years about “the catastrophic decline (almost disappearance) of vocations to the priesthood and its implications for the survival of the Catholic Church in Ireland”.

Fr Hoban noted too that the three bishops – Denis Nulty of Kildare, Ray Browne of Kerry and Francis Duffy of Clogher – were all in their 50s.

“In other words, they’re going to be bishops for almost 20 years, which means that unlike other bishops with just a few years to go, they can’t find refuge in the famous lateral deflection – ‘It’ll do in my time,’” Fr Hoban said.

It was time “for a direct distress call” to Rome, he said.

Fr Hazelwood said there are now six parishes in Kerry with no priest. Closer to him in Cork, there were four churches near Youghal. He wonders how they would be kept maintained and open. His own church in Killeagh needs a new roof. As for Dublin, “I don’t know how they will do it at all [maintain all the churches in the archdiocese].”

Yet in all such instances priests felt “we have to keep it going”, even while income in parishes was also dropping.

As a parish priest, he is paid €28,000 a year, plus his house and a work-related phone allowance. His car, clothes, food, electricity and other living expenses come from his income.

A curate’s income would be lower still. Few if any priests in Ireland are paid the equivalent of the average annual income, put at €36,919 by the Central Statistics Office last year.

“Older people are the ones, traditionally, who are best at supporting the priests but as they die off they are not being replaced,” he said.

To uphold their health, priests have to look after themselves, take time off, take holidays and have a support group if they are to avoid the consequences of isolation, overwork, burnout and worse, he said.

He takes his own advice on this too. But it is also a consolation to know that people in his own parish “are hugely supportive. The faith is still there.”

He believes the higher incidence of suicide among priests over recent years is due “to a mixture of reasons” but some are related to accusations of child abuse.

It remained the case that an accused priest “is presumed guilty” by the church authorities until proven otherwise, and is treated accordingly.

He claimed guidelines from the church’s child protection watchdog, the National Board for Safeguarding Children, on dealing with such priests were being ignored by the church authorities, with sometimes fatal consequences.

Audits on whether those guidelines were being implemented must be undertaken by the board, he said.

When accused priests know how colleagues in similar circumstances in the past had been treated by church authorities, it can prove too much. “Being faced with that is one of the worst things that can happen [a priest]”, he said.

If you have been affected by anything in this article, help and support is available. Please call Samaritans’ 24-hour helpline: 116 123 for immediate support

1 Miriam Lord: Minister for Agriculture tries to get himself out of the manure
2 Coronavirus: One more death and 24 new cases reported in the Republic
3 How fraudsters used lockdown to lure Irish victims into boats and caravans scam
4 Passenger who promised driver a ‘few quid’ after crash awarded €10,000
5 Taoiseach rules out united Ireland referendum as ‘divisive’
Real news has value SUBSCRIBE