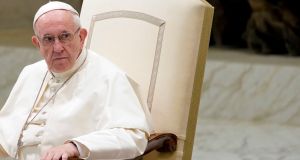 Pope Francis. ‘It is very easy to see Catholic social teaching on the family and economy as idealistic, but there are people all around the world putting it into practice in their business and family lives.’ Photograph: Andrew Medichini/AP

There is a perception that the Catholic Church is obsessed with sexuality, but maybe that perception arises because every time a pope or bishop says something controversial about sexuality, it makes headlines for days. Controversial church statements on the economy are all but ignored.

When Pope Francis issued Amoris Laetitia, his document on love in the family, all the media headlines concentrated on Communion for the divorced and remarried. But when he said in the same document that the inability to secure decent housing forces young people to postpone marriage, it was ignored, as was his critique of the long-hours working culture that makes it really difficult for people to parent.

It was not always the case that papal pronouncements on the economy were ignored. In 1891, when Leo XIII issued Rerum Novarum, which was written to prevent the exploitation of workers and to uphold their right to organise, it was recognised as radical.

Pope Francis used an interesting word, “irksome”, in another one of his documents, Evangelii Gaudium. He says it is “irksome when the question of ethics is raised, when global solidarity is invoked, when the distribution of goods is mentioned, when reference is made to protecting labour and defending the dignity of the powerless, when allusion is made to a God who demands a commitment to justice.”

Centre of the economy

Catholic social teaching puts people and families at the centre of the economy. It is indeed irksome or irritating to a world where profit is often pursued at any cost.

At a World Meeting of Families workshop that I moderated, professor of Economics at the University of Bologna Stefano Zamagni railed against the fact that in mainstream economics, having a child is viewed on a par with deciding to get a family pet – a private good for the family with no implications or benefits for the wider society.

Along with his wife, Vera Negri Zamagni, who is also a professor of economics, Prof Zamagni was sharply critical of the ideological foundations of mainstream economics, which rest on the assumption that the individual is a self-contained autonomous entity. But in reality, no society or economy can thrive when families do not flourish. This theme recurred among the other speakers, Prof Luigino Bruni of Lumsa University in Rome, and professor emeritus of the Michael Smurfit Graduate School of Business Ray Kinsella.

Prof Bruni pointed out that research has shown for decades that economies do not flourish where there is no widespread trust, respect for rules or functioning civic culture. But where does this “intangible capital” come from? Primarily from stable families, where people are educated in co-operation, trust and a sense of civic responsibility.

Prof Stefano Zamagni also emphasised the need for the concept of generativity to be recognised by the State. He meant both generativity in the sense of the family as a place where children are born and cared for, but also generativity as a vital source of the stability which is created when people have homes where their needs are cared for.

Prof Vera Zamagni then traced the policy implications of this vision, firstly in regard to taxation.

Ad hoc solutions like tinkering with childcare grants are meaningless if the taxation is on gross income, instead of basing it on what remains after the costs of raising families are taken into account. She also talked about what she calls harmonisation policies’ regarding work and life.

She believes that terms like work-life balance are inadequate because they presuppose an inherent conflict between work and family life, with paid work being seen as the “real” work.

She says that when women enter a workforce based on a model of men without family responsibilities, unless women are willing to work themselves to death, they end up reducing the number of children they have. Right across the developed world, a demographic crisis is developing. (In Japan, the sale of adult incontinence products for the elderly will outstrip the sale of nappies for babies by 2020.)

Prof Bruni also critiqued the inadequate representation of the irreplaceable female perspective in the workforce, and the lack of value placed on what is freely given in society. He termed this “gratuitousness”, a way of acting and a way of life that consists in approaching others, oneself, nature and things, not to use them for our advantage, but to respect and serve them.

Prof Kinsella was even more trenchant. He said the State is essentially “free-riding” on the services to society – the voluntarism – generated by a model of family which the State is actively seeking to deconstruct. And it has no Plan B for when that deconstruction has predictably disastrous consequences.

It is very easy to see Catholic social teaching on the family and economy as idealistic, but there are people all around the world putting it into practice in their business and family lives, in Fair Trade, in community co-operatives, and in for-profit businesses that also prioritise charitable giving, family friendly policies and respect for the environment.

A world where these so-called “irksome” ideas were the norm would be a heck of a better place for all of us to live.