Thinking Anew – ‘The heavens are telling the glory of God’ 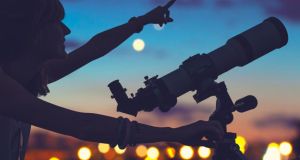 No matter how much we learn about God objectively through our observation of the natural world, we are left with key questions

The Creation is an oratorio written in 1797 by Joseph Haydn and is considered to be one of his finest works. It celebrates the creation of the world as described in the Book of Genesis and was first performed in Vienna in 1799. Tomorrow’s appointed psalm, provides the opening words for its well-known chorus: “The heavens are telling the glory of God”.

Just as the visual arts and music are fascinated by the “the wonders of this world” so too is science. In July, a new radio telescope was officially opened at Birr Castle in Co Offaly. The castle has a long history in astronomy going back to 1845 when the then Earl of Ross built what was then the biggest optical telescope in the world. It remained so for 75 years.

The new facility known as I-LOFAR forms part of a network of radio telescope stations across Europe and will be used to explore the distant universe.

Albert Einstein in his book Ideas and Opinions argues that a sense of the mysterious is essential to the advancement of true art and science. He also suggests that there has also been a long-established religious dimension to this search for a better understanding of the cosmos. “Whoever does not know it and can no longer wonder, no longer marvel, is as good as dead, and his eyes are dimmed. It was the experience of mystery – even if mixed with fear – that engendered religion. A knowledge of the existence of something we cannot penetrate, our perceptions of the profoundest reason and the most radiant beauty, which only in their most primitive forms are accessible to our minds – it is this knowledge and this emotion that constitute true religiosity.”

Dorothy Frances Gurney, poet and hymn-writer, was a woman of faith. One of her hymns – O Perfect Love, All Human Thought Transcending – was written specially for use at weddings but she is best known for words from one of her poems: “The kiss of the sun for pardon/ The song of the birds for mirth, / One is nearer God’s heart in a garden/ Than anywhere else on earth.”

Some will perhaps dismiss such sentiments but others may feel that they speak to their experience of God in creation. St Augustine observed: “Some people, in order to discover God, read books. But there is a great book: the very nature of created things. Look above you! Look below you! Note it. Read it. God, whom you want to discover, never wrote that book with ink. Instead he set before your eyes the things that he had made. Can you ask for a louder voice than that? Why, heaven and earth shout to you, ‘God made me.’”

But no matter how much we learn about God objectively through our observation of the natural world, we are left with key questions like the one posed by the psalmist long ago: “What is man?” In other words, who are we and do we matter? Indeed, in his later years Einstein touched on those questions when he wondered was the universe “friendly”.

We are given answers in the person of Jesus Christ whose life and ministry asserted the value and dignity of every human being. In times past we would have laughed at the idea of the hairs on our heads being numbered but in the age of DNA and other scientific advances we make the staggering discovery that each one of us is unique, and, according to Jesus Christ, known. In the vastness of the universe there is not another you or another me. Jesus brings together our understanding of God of creation “of all that is, seen and unseen” and the God of intimacy, the God who is love.

Goethe captured this when he wrote: “The world is so empty if one thinks only of mountains, rivers and cities, but to know someone here and there who thinks and feels with us and who, though distant, is close to us in spirit, this makes the earth for us an inhabited garden.”