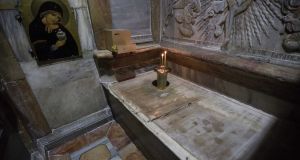 View of the marble slab stone that covered the tomb of Jesus Christ in the Church of the Holy Sepulchre, in the old city of Jerusalem, Israel. Photograph: Abir Sultan 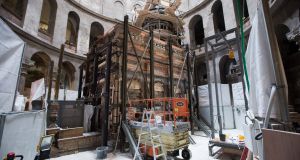 A view of the archaeology work outside the tomb of Jesus Christ in the Church of the Holy Sepulchre, in the old city of Jerusalem, Israel, 01 November 2016. Photograph: Abir Sultan 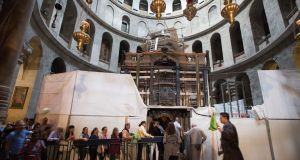 People stand in line by the archaeology works being done outside the tomb of Jesus Christ in the Church of the Holy Sepulchre, in the old city of Jerusalem, Israel, November 1st, 2016. Photograph: Abir Sultan/EPA

Scientists have exposed the original surface of what is traditionally considered to be the tomb of Jesus at the Church of the Holy Sepulchre in Jerusalem.

The tomb has been covered by marble cladding since at least 1555 but most likely for centuries before that. The original limestone burial bed was revealed intact on Friday night, hours before the tomb was to be resealed.

Preliminary findings appear to confirm that portions of the original tomb remain.

It now consists of a limestone shelf or burial bed that was hewn from the wall of a cave. It evolved as a focal point of veneration since first identified by St Helena, mother of Roman Emperor Constantine, in AD 326.

Since at least 1555, and probably centuries earlier, the burial bed has been covered in marble cladding, allegedly to prevent pilgrims from removing bits of the original rock as souvenirs.

It is enclosed in a structure known as the Edicule (from Latin, meaning ‘little house’) last reconstructed in 1808-1810 after being destroyed in a fire.

The Edicule and the interior tomb are currently undergoing restoration work by scientists from the National Technical University of Athens.

Fredrik Hiebert, archaeologist-in-residence at the National Geographic Society, a partner in the restoration project, said: “It will be a long scientific analysis, but we will finally be able to see the original rock surface on which, according to tradition, the body of Christ was laid.”

Christians believe the body of Jesus was laid on a shelf or burial bed there hewn from the side of a limestone cave following his crucifixion by the Romans in AD 30 or possibly AD 33. It is also believed Jesus was resurrected from the dead there and that women who came to anoint his body three days after burial reported no remains were present.

The Church of the Holy Sepulchre is currently under the custody of six Christian denominations.

The Greek Orthodox Church, the Roman Catholic Church, and the Armenian Orthodox Church maintain primary control, while Coptic, Ethiopian Orthodox, and Syriac Churches also have a presence. Parts of the Church are considered common areas of worship, including the tomb.

In 2015 the Greek Orthodox Patriarchate of Jerusalem, with the agreement of the other major Churches, invited the National Technical University of Athens to study the Edicule and last March it was agreed to restore it with the work to be completed by spring of next year.