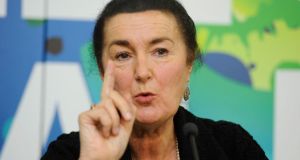 Psychologist Dr Maureen Gaffney: “I’ve been deeply troubled by the way the campaign has been run by some elements on the No side.” Photograph: Dave Meehan

Clinical psychologist Dr Maureen Gaffney has said she was so troubled by how some on the No side in the same-sex marriage referendum campaign were conducting themselves that she had decided to become involved.

At a Yes Equality press conference in Dublin yesterday, she said: “I’ve been deeply troubled by the way the campaign has been run by some elements on the No side and that’s why I’ve decided to support – I was going to vote Yes anyway – but to actively support the campaign because I can only describe what has happened as a kind of guilt by association campaign.”

She found it “really egregious that the problems of surrogacy are being loaded on to gay, lesbian and bisexual people as if they haven’t enough to deal with”. She found “the idea of surrogacy a most troubling issue – it’s like the wild west and requires very strong regulation nationally but also internationally”.

On the implication “direct and indirect that children would be the sufferers if they were to come next, nigh or near gay parents”, she had looked at studies from as far back as 1971 and “they have found no differences” in children whether raised by gay or heterosexual couples.

“I can say without hesitation that there is not one study in literature that shows any difference in the emotional, education and social development of children who are reared by gay and lesbian couples. The things that matter to children are emotional security, someone at your back. Gender has no bearing on how well or how badly you do that.”

Fergus Finlay, chief executive of Barnardos, said all the relevant literature concluded “the single most important thing for a child is the quality of parenting that child receives”.

Parenting was “a function of quality, not of colour, not of income, not of race, not of gender, not of sexual orientation. You will not find anywhere a piece of literature that proves or establishes, or even raises a question mark, about some of the assertions that have been made by the No campaign in this referendum,” he said. At Barnardos “we’re not just comfortable about supporting this referendum, we’re proud to support it” . Peter Ward SC said May 22nd was “an incredibly rare opportunity to put into the fundamental law of our country that we embrace all of our citizens in their full human dignity, equally”. It was “rare to get an opportunity to end discrimination for that is what we’re doing”.

Mr Ward added: “The central issue is of equality. Adoption law will remain as is,” while “surrogacy is for the Oireachtas to regulate”. It was “a fantastic opportunity for our Constitution to catch up with the lived lives of us, all of us”.