Travellers ‘devastated’ as redevelopment of site in doubt again 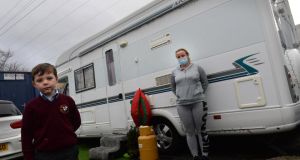 Residents of the State’s oldest Traveller housing development are “devastated” after its redevelopment, first promised 21 years ago, has again been thrown into doubt.

Families in Labre Park in Ballyfermot, Dublin, fear some may be “forced from our homes” after Dublin City Council (DCC) declared a significant portion of the site a flood-zone that was unsafe for housing.

Labre Park, completed in 1967, was the first purpose-built local authority Traveller housing scheme. Located between an industrial estate and the Grand Canal, it contains 20 small houses.

There are also 20 households living in caravans.

Though on the site unofficially, most of the vans have been there for about 20 years. Until 2011 many had neither electricity nor running water when they were provided with sanitation units – metal huts with washing and laundry facilities – by the council. The families pay €10 a week each for them.

Caravans are tightly packed on potholed, puddle-filled uneven ground. Most have electricity only from the sanitation units which life-long resident Mary Berry says are “freezing, icy cold to wash yourself or to go to the toilet at night”.

Redevelopment plans have been included in each of the council’s Traveller Accommodation Programmes (TAP) since 1999.

If we all got forced out of our homes, scattered and separated into other places, we’d be lost without each other

This third TAP committed to: “The redevelopment of Labre Park in accordance with the plans to be developed through [a collaboration between the Clúid housing body, the council and the Ballyfermot Traveller Action Project (BTAP)].”

Clúid would consult with residents on the redevelopment, the council would fund it and Clúid would manage the new site on the council’s behalf. Consultations were completed in December 2016.

The plan, for 30 new units of accommodation – a mix of serviced bays and houses – was agreed in March 2018 and submitted for planning.

However, technical assessments in 2019 found the left side of the site, where the caravans are, was a flood-risk zone lying within the Camac River floodplain. The site has flooded five times since 2001.

Possible mitigation measures included flood barriers, but these raised concerns they might simply divert flooding to adjacent roads and properties.

In October it was recommended that a final decision on redeveloping the left of the site should wait until another report, the Camac River Flood Alleviation Study, was completed. It is thought this could be another year, says Shay L’Estrange, BTAP co-ordinator.

“There is a huge level of mixed messaging that we need clarity on. The community, again, is left in a state of flux,” he says.

In the meantime, the council proposes building 10-15 houses on the right-hand side of the site, close to the existing houses – accommodating about half the families in need. Clúid and the council say they will “now begin to secure appropriate alternative accommodation” for those who won’t get one of the new houses.

“Our fear,” says Mr L’Estrange, “is for them – that they’ll be forced out into assimilation into the settled community.”

Ms Berry, now married with two children and living in one of the caravans, describes as “alright” growing up in Labre. “But with all the potholes and nowhere safe to play it was horrible.”

We have to roll up our sleeves now and get this right. This is hugely disappointing for the residents and they must be at the centre of any solution

However, she wants to remain with her community.

“You feel safe here, normal here. If we all got forced out of our homes, scattered and separated into other places, we’d be lost without each other. Here there’s no racism, you can just be who you are.”

Local Sinn Féin councillor Daithí Doolan, who describes conditions in Labre as “intolerable in 21st-century Ireland”, says it was “always the poorest in any community that live on the worst lands”.

He says it would be “unacceptable” to build housing on a floodplain.

“We have to roll up our sleeves now and get this right. This is hugely disappointing for the residents and they must be at the centre of any solution. Some may want to move off and some want to stay. For those happy to leave, the council may have to buy land locally and build [a] small group housing scheme, if that is what the residents want.

“On the half of Labre that’s a floodplain, let’s be imaginative. We could put a wonderful recreation centre there, or some social enterprise.”

A spokesman said Clúid was committed to refurbishing or extending the existing houses in Labre Park.

“Over the next 12 months we will work with DCC and the community to secure appropriate housing solutions for all those affected by the update to the plans. We will then commence development by clearing the site in preparation for construction. This will likely occur in Q4 of 2021 into Q1 2022.”

A council spokesman said: “A new plan will formulated as soon as possible in full consultation with all the residents. This will deal with the needs of all existing residents.”