'Pope Francis wants fasting and prayer to deal with the hushed pain. Give me a break'

‘Atrocities perpetrated by consecrated persons’ a fair description of abuse 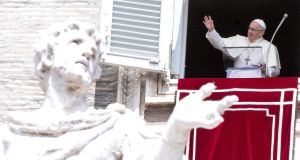 Was it a good letter from Pope Francis?

Not a great letter?

Not a great letter!

It is, but “sorry” has become the easiest word. Being pope these days means forever having to say you’re sorry.

“I openly express the shame and remorse that we all feel,” that’s from Pope Benedict XVI’s Letter to the Catholics of Ireland in March 2010. He could “only share in the dismay and the sense of betrayal that so many of you have experienced on learning of these sinful and criminal acts.”

Sound familiar? Of course it does.

He spoke of ongoing work in the church “to ensure the safety and protection of the integrity of children and of vulnerable adults, as well as implementing zero tolerance and ways of making all those who perpetrate or cover up these crimes accountable.”

But in that 2010 letter, his predecessor said: “Since the time when the gravity and extent of the problem of child sexual abuse in Catholic institutions first began to be fully grasped, the church has done an immense amount of work in many parts of the world in order to address and remedy it.”

But Pope Francis admits this has not worked?

He says: “We have delayed in applying these actions and sanctions that are so necessary, yet I am confident that they will help to guarantee a greater culture of care in the present and future.”

As the famed dogs in the street might say, if they could speak, “Sure we all know that!” It’s simply a case of “We admit we haven’t done what we know is ‘so necessary’ to do, but don’t worry, we’ll get round to it yet.”

Pope Francis also wants us to undertake fasting and prayer to “open our ears to the hushed pain felt by children, young people and the disabled”. Give me a break.

Who needs it to hear the pain of people who have been abused? Just ask them. They’re not in short supply, particularly in Ireland. In his 2010 letter, Pope Benedict was on the same tack: “I ask you to offer up your fasting, your prayer, your reading of scripture and your works of mercy in order to obtain the grace of healing and renewal for the church in Ireland.”

Eight years later it has made all the difference, clearly.

So is there nothing good at all in Pope Francis’s letter?

There’s the genuine passion of his language. It fits with the man’s warm heart, and it’s accurate. His “atrocities perpetrated by consecrated persons” is a fair description of the “slaughter” that can be child sex abuse. And he is excellent on clericalism, which, he says, helps “perpetuate many of the evils that we are condemning today. To say no to abuse is to say an emphatic no to all forms of clericalism.”

And that’s it? Surely the letter is a powerful den

unciation of clerical child sex abuse and in which Pope Francis makes it explicitly and unequivocally clear whose side he is on – that of the abused.

Are you saying Pope Benedict was not on the side of the abused?

Did you not read that part of Pope Francis’s letter where he endorses what Pope Benedict said in 2005? When he exclaimed: “How much filth there is in the church, and even among those who, in the priesthood, ought to belong entirely to [Christ].”

In his letter Pope Francis has not advanced church handling of the clerical child sex abuse issue one inch beyond where it was when Pope Benedict sent his letter to the Catholics of Ireland eight years ago. Yes, he talks the talk, but what has changed since?

Didn’t the Vatican set up the Commission for the Protection of Minors in 2014?

And it’s as idle as a painted ship upon a painted ocean. Ask Marie Collins, the Irish abuse survivor who resigned from the commission amid frustration with some officials in the Roman curia. That commission is a toothless pussycat.

So what would you do if you were Pope Francis?

Very simple. I’d bring Archbishop Diarmuid Matin back to Rome with me. I’d put him in charge of a new tribunal at the Vatican whose sole brief would be to hold bishops and religious superiors to account for covering up/facilitating the abuse of children and vulnerable people. I’d give him the powers to remove the truly errant ones among them from office. Then I’d sit back and watch with pleasure as he kicked some very deserving ass.