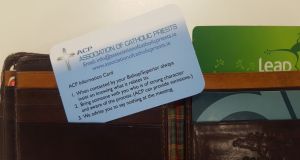 The information card issued to members of the Association of Catholic Priests on how to deal with abuse allegations.

The Association of Catholic Priests (ACP) has issued a portable information card to assist priest’s faced with abuse allegations.

It was claimed at its annual meeting in Athlone last week that guidelines prepared for the handling of such cases by the church’s own child protection watchdog, its National Board for Safeguarding Children (NBSC), were not being followed by bishops and religious superiors.

The seven pointers on the information card, designed in a credit card size to fit handily in a wallet, “are in keeping with recommendations” by the NBSC, the ACP says.

They advise an accused priest that:

“1. When contacted by your bishop/superior always insist on knowing what it relates to.

“2. Bring someone with you who is of strong character and aware of the process. (ACP can provide someone.)

“3. We advise you to say nothing at the meeting.

“4. Request the diocese to resource a canon lawyer and civil lawyer of your choosing.

“5. Sign nothing and give no verbal undertaking at the meeting.

“6. Do not be persuaded to ignore or bypass these guidelines no matter how often they say it is in your own best interest.

“7.Ask the person who accompanies you to take notes of the proceedings and to sign them.”

Fr Tim Hazelwood of the ACP leadership team told the meeting that at recent regional meetings it emerged that very little support was being offered accused priests and many felt the right to due process was being denied to them.

It was claimed priests statutory rights were being denied in instances while there was “no strategy for innocence.” It was also claimed that innocent priests were “often grudgingly returned to ministry” and it was unjust “that a priest should be asked to stand-down on the basis of an anonymous accusation.”

Such was the current level of unhappiness among priests about the handling of allegations by bishops that “there is an expectation that a priest will eventually sue a diocese for ill-treatment, bad practices etc.”

There was also a call for a strengthening of the NBSC standard for the care and management of accused priests.

Fr Hazelwood presented the meeting last week with three current cases as examples of what ACP members are concerned about.

One priest was phoned by his superior who asked to see him. No reason was given nor was he advised to have someone with him. He was told there was a complaint against him. The priest asked if he should get a solicitor and was told, “it might not be a bad idea.” The priest was not offered any support.

Another priest was phoned by his superior who asked to meet him. Again, no reason was given and he was not advised to bring anybody. He met the superior and a canon lawyer. The priest was told he did not have to say anything and was advised to seek the help of both a canon lawyer and civil lawyer. He suffered huge trauma and felt someone should have been with him, Fr Hazelwood said.

In another case, a priest was asked to see his superior. He was not told to bring anyone with him or the reason for the call. The superior was with the child safeguarding person, and the priest was then informed of allegations. The priest had little memory after that. He was told he could have a support person of his choice.

According to guidelines for bishops and religious superiors prepared by the NBSC for such cases an accused priest should be told he may be accompanied at such meetings. He should be informed of his rights in canon and civil law and the right to remain silent.

He should be given sufficient details of allegations so he may offer a response if he wishes. A written record should be sent to him for signing after the meeting and he should be given written information about Church procedure in such cases.

Meanwhile, the Catholic Primate Archbishop Eamon Martin and Archbishop of Dublin Diarmuid Martin have agreed to a request for a meeting with the ACP. Last August the ACP leadership team wrote to the Catholic bishops requesting a meeting in the context of the World Meeting of Families in Dublin next August and a probable visit by Pope Francis.

The date proposed for the meeting is January 15th next at Archbishop’s House in Drumcondra, Dublin.