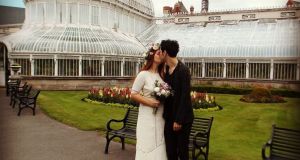 Emma DeSouza and her husband, Jake on their wedding day in July 2015. Photograph: Emma DeSouza

A Derry woman and her American husband have won their appeal against the UK Home Office’s decision to reject their visa application after the woman refused to call herself British.

Emma DeSouza, from the town of Magherafelt in Co Derry, and her husband Jake from Los Angeles were married in Belfast in July 2015.

However, Mr deSouza’s application for a residence card to live and work in Northern Ireland was rejected when his wife applied for the visa as an Irish national.

Ms DeSouza was told in September 2016 that under British nationality law she was a British citizen.

As a British citizen, she was told she could renounce her citizenship and reapply for the visa as an Irish citizen. However, Ms DeSouza refused to sign any declaration that indicated she is British.

Under the Belfast Agreement people born in Northern Ireland can choose to be British citizens, Irish citizens or have dual citizenship.

Ms DeSouza told The Irish Times in July that she had “only ever identified as Irish,” only held an Irish passport and at no point was a dual national.

“I was raised to believe I could be Irish-only in Northern Ireland,” she said, accusing the UK home office of “either choosing to ignore the Good Friday Agreement or failing to fully understand it”.

The couple could have moved to the Republic and reapplied for the visa through the Irish Government but argued that south of the Border was not their home.

“We’re settled in Belfast. We have two dogs and we don’t see the need to move. I thought I had this right from birth.”

Mr DeSouza has been unable to leave Northern Ireland to visit family in the United States since he filed the visa application with his passport in 2015.

He also had to stop driving when his year-long licence as a US national expired.

After two years of waiting, the DeSouzas received word this week that the First-Tier Tribunal judge overseeing their case had upheld the couple’s appeal and found that Jake was “entitled to a residence card”.

The judge also found Ms DeSouza was “an Irish citizen and has only ever been such”.

The judge concluded that under the terms of the Good Friday Agreement the people of Northern Ireland are in a “unique position” whereby they can identify themselves as Irish or British or both.

The UK home office has been given 14 days to appeal the decision.

Ms DeSouza described the judge’s decision as “powerful and vindicating” and expressed her relief after two years of battling for her rights.

“It felt like the visa and immigration department were implying my choice to identify as Irish was merely a lesser or partial identity.

“We understood that British Nationality laws were not changed to align with citizens rights post the Good Friday Agreement but felt that a peace keeping international treaty carried more weight...We have stayed the course because we feel like choosing a life here should not mean compromising who we are.”

Sinn Féin senator Niall Ó Donnghaile, who has supported the couple during the appeal, said the judge’s decision showed the Good Friday Agreement was “not merely aspirational or symbolic” but “a practical, working and applicable document which upholds and protects the nationality of citizens who claim Irish or Irish-British citizenship under its terms”.

He called on the British government to accept the decision and to instruct the immigration authorities not to appeal.

In a statement, the Home Office said: “We are considering the judgement in this case. It would be inappropriate to comment further at this time.”