‘He called me the ‘N’ word, I felt absolutely terrible’ 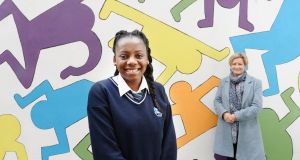 Joella Dhlamini (16) with her teacher Elaine Mills: “Everyone thinks Irish history is boring but I want to know everything about it. My favourite taoiseach is Seán Lemass because Ms Mills loves him.” Photograph: Alan Betson

Joella Dhlamini had been living in Ireland a year the first time she was racially harassed on the street.

It was Christmas and the then 14 year old was walking with her cousin down a busy shopping street in central Dublin when a man in his 20s turned, cursed and spat in her face. “He called me the ‘N’ word. I started crying and had to go to the bathroom to wash my face. I felt absolutely terrible. My cousin was speechless, she didn’t know what to do either.”

Dhlamini, now 16, returned home to her mother in Drogheda confused and upset. “It was my first time hearing that word because when I was in South Africa we were all black. My mum had to explain it to me. She said ‘there’s nothing you can do about it, you don’t know these people so don’t take it to heart’. I guess I was sheltered from all that back home.”

Earlier this week the Irish Council for Civil Liberties released a report highlighting severe shortcomings in the State’s response to hate crime. The report, entitled the Lifecycle of a Hate Crime, warned that hate crime was “not part of the language of the Irish criminal justice process” and that the State had a responsibility to “send a clear message to society that hate crime is not tolerated”.

Emily Logan, chief commissioner of the Irish Human Rights and Equality Commission (IHREC) underlined that it was “not the responsibility of victims to avoid being targets of hate crime”.

A day with Varadkar

Last November, Dhlamini was chosen by Unicef to spend a day shadowing Taoiseach Leo Varadkar after entering a competition to mark World Children’s Day. Afterwards, she spoke on national television about the racism she has experienced since moving to Ireland more than three years ago.

Dhlamini was walking back to her cousin’s apartment in Dublin that evening when a passerby muttered a racist remark. “I ignored him but felt annoyed so out of built-up frustration I went back and typed up exactly what I was feeling. When I look back at that day, I want to thank that man. I know that might sound odd but if he didn’t annoy me I wouldn’t have written with such passion.”

Dhlamini wrote about the numerous times she’d been called names and cursed at in Galway, Drogheda and Dublin by people of all ages, from teenagers to the elderly.

“I have experienced it in Drogheda but not as much as in Galway. In Drogheda they don’t really follow you or call you ‘gorilla’. I get really angry but try not to respond. I don’t want to waste my energy on these arrogant people.”

Dhlamini’s history teacher, Elaine Mills, was shocked when she saw her student speaking on TV about racism.

“I was gobsmacked and taken aback that it was so overt. To be honest I had never really thought about it. Even in the staff room we commented among each other that we didn’t realise that level of racism existed. We’d be conscious of the different nationalities and how difficult it can be to integrate but I think until somebody actually says it so clearly and articulates it so well, only then does it hit home.”

Dhlamini became close to Mills during her three years of studying Junior Cert history. She had arrived in Ireland from Johannesburg shortly before Christmas 2014 and only began first year in January.

“It was hard at the start because after those few months everyone had already found their own circle while I was just cruising along seeing who wanted to be my friend,” says Dhlamini. “People automatically thought I couldn’t speak English which annoyed me. Just because it’s an African country doesn’t mean I don’t speak English.”

By the end of the first year of school, Dhlamini had built strong relationships with a group of girls in her class. She also discovered a passion for Irish history. “Everyone thinks Irish history is boring but I want to know everything about it. My favourite taoiseach is Seán Lemass because Ms Mills loves him. He’s the one who modernised everything in Ireland, he brought a new age to this country.”

Mills was impressed by the energy and drive of her young South African student. “It’s not easy to pick up on Irish history when you’ve no context. There was no African history on the course, only Irish and European and that was fairly thrown at you, particularly in the third-year course. But Joella speaks very well and she’s articulate. She’s a fantastic ambassador for the school.”

Dhlamini has never experienced racism at school and feels comfortable speaking openly with her peers about the abuse she has suffered in public. “I guess the girls see me not by the colour of my skin which I really appreciate. I’ve never had any nasty remarks here.”

Dhlamini’s mother, Thandi, did not realise her daughter would receive so much media attention during her day around Leinster House.

“I didn’t know it would be that big. I wouldn’t want to be in the spotlight like that, I’m more timid. Joella is outgoing, she’s not like me. She has confidence, I never had that confidence.”

Dhlamini’s mother also worried how the general public would respond to accusations of racism in Irish society. However, her daughter’s lack of interest in social media means she was spared the online onslaught which is becoming increasingly common towards any person who speaks out about injustice or inequality.

“I have Facebook, Instagram and Snapchat but if you went to my accounts there’s nothing there. I don’t feel the need to post updates about my life. There was a video posted online and obviously there were some nasty comments underneath, some were pretty bad. But there’s no point in giving these people attention, they’re irrelevant.”

Aside from speaking about her experiences on TV, Dhlamini also raised her grievances directly with the Taoiseach.

“He told me that as the son of an immigrant he had experienced some racism too and was glad to see someone bringing it to the spotlight and making people aware of the issue.

“I guess people need to stop being ignorant because they’re sheltering themselves from the wonderful opportunities of meeting new people and sharing cultures. Diversity is crucial, without diversity we would all be the same.”

Dhlamini hopes to study law in Dublin when she finishes school. “I’d like to become a lawyer for human rights. I’d like to show people how not to be closed-minded because, at the end of the day, ignorance gets you nowhere. It just holds us back as a human race instead of coming together and making the world a better place for everyone.”