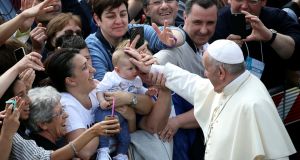 Pope Francis blesses a child at the end of his pastoral visit in Loppiano, central Italy. Photograph: Alessandro Bianchi/Reuters

“Fake news spreads arrogance and hatred; it discredits others, presenting them as enemies, to the point of demonising them and fomenting conflict. The current referendum debate, including the decisions this week by Google and Facebook to shut down digital advertising regarding the referendum, has generated its fair share of accusations and counter accusations of fake news,” he said.

Welcoming Pope Francis’ message for World Communications Day 2018 on Sunday. The Archbishop said it “resonates strongly this week in Ireland as we count down to the referendum on the Eighth Amendment”.

Pope Francis, he said, “tells us fake news is false but believable news that is sensational and often goes viral. It is the ‘spreading of disinformation online or in the traditional media . . . based on non-existent or distorted data meant to deceive and manipulate the reader’.”

Meanwhile, in a pastoral letter on the forthcoming referendum Archbishop of Cashel Kieran O’Reilly said “the silent infants in the womb call on us, out of our common humanity, to protect them and to give force to that protection by rejecting this proposal being put to us”.

He said “disciples of Jesus Christ are called to respect all human life from its beginning to its natural end”.

He appealed particularly to young people to “speak to your family and friends explaining to them why you believe that the life of the unborn baby must be protected. Let your voice be heard now and not just on the day you cast your ballot.”

In another pastoral letter Bishop of Killala John Fleming said repeal of the amendment “would leave unborn children at the mercy of whatever laws might be introduced in Ireland in the future”. In recent centuries especially, he said, “equality has become a dominant aspiration of the human spirit”.

It was “particularly difficult to accept, therefore, that the proposal in the referendum would delete the word “equal” from the text of the Constitution and, as a result, fail to support the most vulnerable in our world”.

In a pastoral reflection this weekend also Bishop of Galway Brendan Kelly said “D-day will be 25th May – this glorious month of the dawn chorus and beautiful blossoming thorn trees, against the backdrop of long lingering evenings and bright mornings, of increasing warmth and the welcoming of summer. Life blooming, new life. All around us, everywhere except . . ?”

The right to life “is not and never can be in the gift of any parliament or legislature. It belongs to each of us simply as human beings, from our first moment of existence to the moment of natural death.”

There was, he said, “something scandalous about presenting ‘termination’ as a first or simple solution”.

Administrator of Clogher diocese Msgr Joseph McGuinness said that “medical science and modern technology simply show us what our own experience tells us – that a child in the womb is as real and living and unique a human being as any one of us”. If the amendment is repealed “children in the womb will no longer be recognised in law as human at all”, he said.

“As human beings we should stand up for the rights of other human beings, especially those who have no voice and no vote. As Catholics, we cannot in conscience vote for something which is directly contrary to the fundamental teaching of Jesus Christ to respect and defend the lives of all, especially the weak and the vulnerable. It is a solemn duty for each one of us to vote in this referendum,” he said.