Pope in Ireland: Most think he did not go far enough on abuse issue 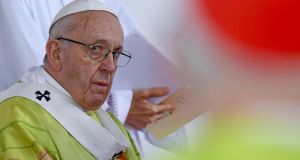 Four out of five respondents to the poll say the visit of Pope Francis has not changed their view of the Catholic Church. Photograph: Ciro Fusco /EPA

A clear majority of Irish people say that Pope Francis “did not go far enough” when he addressed the issue of child sex abuse in the Catholic Church on his visit to Ireland last week, an opinion poll has found.

Asked “on the issue of child sex abuse within the church, did the Pope go far enough during his visit to address the issue or did he not go far enough?” 55 per cent of respondents said Pope Francis had not gone far enough.

Just under a third (31 per cent) agreed he had gone far enough, while 14 per cent said they had no opinion.

The poll was conducted among 750 adults via telephone by Ipsos MRBI for The Irish Times yesterday in the wake of the pope’s visit. The accuracy is estimated to be plus or minus 3.6 per cent.

Although some people attended more than one event, the numbers in today’s poll suggest that likely in excess of 400,000 people saw the pope at one of the three public events or when he drove through Dublin city centre in his popemobile.

Of those who attended, the vast majority said the events were organised either “very well” or “fairly well”. Two thirds (66 per cent) said they attended to express their faith.

However, although respondents are largely well-disposed to Pope Francis personally and were in favour of the visit by a large majority, the visit itself has not changed the views of most people about the church.

Four out of five respondents to the poll (80 per cent) say the visit of Pope Francis has not changed their view of the Catholic Church, though this number includes both those with a positive and negative view.

The poll shows a huge majority of Irish people would like to see change in church teachings on clerical celibacy, women priests, contraception and same-sex marriage. These changes are favoured by Catholics and non-Catholics alike. A smaller majority of people favours change in the church’s position on abortion.

Yesterday, Minister for Children Katherine Zappone said she had told the pope in person and in a letter that she hopes the Catholic Church will make reparation for its part in what happened at the Tuam mother and baby home, where large numbers of children were buried in unmarked graves that may have formed part of the home’s sewage system.

She asked that the church should contribute “substantially” to the cost of whatever action the Government decides to take at the site.

“This should be done willingly, unconditionally and quickly,” the letter states.

The Tánaiste and Minister for Foreign Affairs Simon Coveney said the Tuam Mother and Baby Home was an example of the “shared responsibility” between the church and State for the mistreatment of people in the past.