Number of deportations always rise in August when solicitors are on holiday, says academic 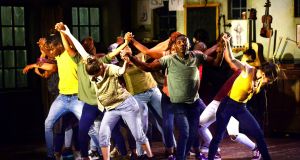 Direct provision performers at the Abbey Theatre in the spirit of Jimmy Gralton, hosted by Donal O’Kelly. Photograph: Cyril Byrne / The Irish Times

A young Pakistani nurse joined more than 30 dancers on the Abbey stage on Monday just hours before he boarded a flight after being served with a deportation order by the Government.

Vekash Khokhar, who volunteered at last week’s World Meeting of Families conference and at Sunday’s papal Mass in the Phoenix Park, was one of the performers at the Abbey Theatre’s Jimmy’s Hall Today assembly which was held in the national theatre to raise awareness of the threat of deportation in Ireland.

Mr Khokhar received a deportation order earlier this summer and will fly back to Pakistan on Monday night after spending more than three years living in a direct provision centre in Co Longford. Mr Khokar, a trained intensive care unit nurse, was an active volunteer in the local music and theatre scene during his time in Longford and also volunteered five days a week in a nursing home.

Mr Khokhar chose to leave the country voluntarily ahead of his deportation to avoid facing potential detention as a deportee on his arrival in Pakistan.

Mona Considine, general manager of the Longford’s Backstage Theatre where Mr Khokhar performed in a dance project in 2017, said the community would “not stop fighting” to bring him back to Ireland.

“One thing that strikes me is that it [the dance piece] was funded by the Department of Justice under the integration fund,” said Ms Considine. “It’s such a contradiction that they would fund us to integrate, but they didn’t expect us to actually truly integrate. They just expected a box-ticking exercise but that’s not what we do in the arts. To think you would fund somebody to integrate and then turn your back on them is beyond belief.”

The Abbey event was organised by actor Donal O’Kelly, who stars in the theatre’s production of Jimmy’s Hall, to draw parallels between the story of Leitrim farmer Jimmy Gralton – the only Irishman deported from his own country – and asylum-seekers facing deportation today.

A message read out on stage from Ken Loach, the British director behind the film version of Jimmy’s Hall, noted that if Gralton were alive today “he would be shouting form the rooftops about the unjust treatment of those coming to Europe and Ireland seeking a safe place of refuge”.

UCD lecturer Dr Anne Mulhall highlighted how the number of deportations of asylum-seekers had risen sharply in recent weeks. “There’s always an increase in August because it’s when solicitors take their holidays. Deportations increase because people can’t get a hold of their lawyers.”

Dr Mulhall also addressed the recent changes to the State’s deportation policies since the introduction of the 2016 International Protection Act which she said ensures deportations happen “a lot more quietly”.

She criticised Minister for Justice Charlie Flanagan’s praise of the Act and the subsequent drop in the number of people being granted humanitarian leave to remain in Ireland.

Some 163 asylum seekers were granted leave to remain in 2017, down from 465 in 2016 and 1,201 in 2015. Highlighting the lack of transparency at ports of entry, Dr Mulhall claimed immigration officials could make a decision on whether to allow a person entry into Ireland “based on a whim”.

Lucky Khambule from the Movement of Asylum Seekers described the fear one feels when they receive a deportation order. “Your life changes, you are never the same. You live in fear, you don’t know what’s gonna happen to you. You’re standing in the gallows with the rope around your neck waiting for someone to kick the chair. They leave children behind, they separate parents. It destroys families.”