Pope Francis: ‘We showed no care for the little ones; we abandoned them’

The Vatican, in its first response to a damning report by a US grand jury on sexual abuse of children by priests in Pennsylvania, on has expressed "shame and sorrow". Pictures: Reuters 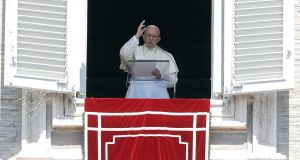 The Catholic Church had delayed in applying necessary actions and sanctions for the protection of children and must “guarantee a greater culture of care in the present and future,” Pope Francis has said in a strongly worded letter to the worlds’s Catholics this morning.

“We showed no care for the little ones; we abandoned them,” he said.

“The extent and the gravity of all that has happened requires coming to grips with this reality in a comprehensive and communal way,” he said.

“Today we are challenged as the People of God to take on the pain of our brothers and sisters wounded in their flesh and in their spirit. If, in the past, the response was one of omission, today we want solidarity, in the deepest and most challenging sense, to become our way of forging present and future history,” he said.

In what is described as “an impassioned letter addressed to the whole people of God”, he called on the Church “to be close to victims in solidarity, and to join in acts of prayer and fasting in penance for those ‘atrocities’.”

He acknowledged “once more the suffering endured by many minors due to sexual abuse, the abuse of power and the abuse of conscience perpetrated by a significant number of clerics and consecrated persons.

“Crimes that inflict deep wounds of pain and powerlessness, primarily among the victims, but also in their family members and in the larger community of believers and nonbelievers alike. Looking back to the past, no effort to beg pardon and to seek to repair the harm done will ever be sufficient.

“Looking ahead to the future, no effort must be spared to create a culture able to prevent such situations from happening, but also to prevent the possibility of their being covered up and perpetuated. The pain of the victims and their families is also our pain, and so it is urgent that we once more reaffirm our commitment to ensure the protection of minors and of vulnerable adults.”

Referring to the Pennsylvania grand jury report published last week in the US, which found more than 300 priests abused more than 1,000 children, he said “even though it can be said that most of these cases belong to the past, nonetheless as time goes on we have come to know the pain of many of the victims”. “We have realised that these wounds never disappear and that they require us forcefully to condemn these atrocities and join forces in uprooting this culture of death. these wounds never go away. The heart-wrenching pain of these victims, which cries out to heaven, was long ignored, kept quiet or silenced.

“But their outcry was more powerful than all the measures meant to silence it, or sought even to resolve it by decisions that increased its gravity by falling into complicity.”

He said “with shame and repentance, we acknowledge as an ecclesial community that we were not where we should have been, that we did not act in a timely manner, realizing the magnitude and the gravity of the damage done to so many lives. We showed no care for the little ones; we abandoned them.”

Every one “of the baptized should feel involved in the ecclesial and social change that we so greatly need,” he said.

He invited “the entire holy faithful People of God to a penitential exercise of prayer and fasting” saying “this can awaken our conscience and arouse our solidarity and commitment to a culture of care that says ‘never again’ to every form of abuse.”

Clericalism, “whether fostered by priests themselves or by lay persons, leads to an excision in the ecclesial body that supports and helps to perpetuate many of the evils that we are condemning today. To say ‘no’ to abuse is to say an emphatic ‘no’ to all forms of clericalism,” he said.

“The only way that we have to respond to this evil that has darkened so many lives is to experience it as a task regarding all of us as the people of God,” he said. “Without the active participation of all the Church’s members, everything being done to uproot the culture of abuse in our communities will not be successful in generating the necessary dynamics for sound and realistic change,” he said.

It was “essential that we, as a Church, be able to acknowledge and condemn, with sorrow and shame, the atrocities perpetrated by consecrated persons, clerics, and all those entrusted with the mission of watching over and caring for those most vulnerable. Let us beg forgiveness for our own sins and the sins of others.”