Cardinal in Pennsylvania withdraws from World Meeting of Families in Dublin 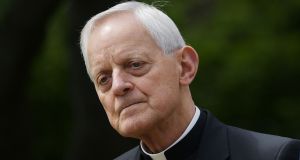 Cardinal Wuerl, who was bishop of Pittsburgh, Pennsylvania, from 1988 to 2006, was heavilly criticised in the grand jury report report. Photograph: AFP

A Cardinal who was heavily criticised for his handling of child sexual abuse allegations in the Pennsylvania grand jury report has withdrawn from a scheduled appearance at the World Meeting of Families in Dublin next week, it has been confirmed.

Cardinal Donald Wuerl, the Archbishop of Washington, was due to give the keynote address, entitled “The Welfare of the Family is Decisive for the Future of the World,” in the RDS at 2.30pm next Wednesday.

No reason has been provided for the decision.

Cardinal Wuerl was bishop of Pittsburgh, Pennsylvania, from 1988 to 2006. The report of the grand jury, which was published on Tuesday, found “wholesale institutional failure that endangered the welfare of children” in Pittsburgh.

The report faults Cardinal Donald Wuerl, a former bishop of Pittsburgh and now Archbishop of Washington, for what it said was his role in the concealment of sex abuse.

It chose three examples from cases involving 99 abusive priests there as “a window into the conduct” of bishops “and the crimes they permitted to occur on their watch”.

This continued when bishop Wuerl took over. In 1991 bishop Wuerl granted Paone’s request to serve in the Diocese of Reno-Las Vegas.

Following another abuse complaint against the priest in 1994, he was sent for treatment.

In February 2003, bishop Wuerl accepted the priest’s resignation from ministry. As the grand jury report put it: “Approximately 41 years after the diocese learned that Paone was sexually assaulting children, he was finally retired from active ministry.”

“The clear and present threat that Paone posed to children was hidden and kept secret from parishioners in three states,” the report said. “Wuerl’s statements had been meaningless without any action.”

Last week Cardinal Wuerl said in response to the grand jury report that while in Pittsburgh he had “acted with diligence, with concern for the victims and to prevent future acts of abuse”.

Cardinal Wuerl is the second US Cardinal due to Dublinattending the World Meeting of Families who has cancelled.

On Wednesday Cardinal Seán O’Malley, chair of the Vatican’s Commission for the Protection of Minors, announced he would not be attending.

Archbishop of Boston Cardinal O’Malley was scheduled to chair a discussion on Safeguarding Children and Vulnerable Adults at the WMoF on Friday August 24th.

The panel includes Dublin abuse survivor Marie Collins, who resigned from the Commission for the Protection of Minors last year in protest at the frustration of its work by Vatican officials.