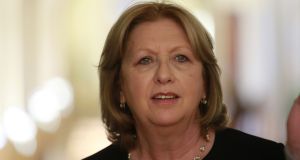 Former president Mary McAleese has claimed Pope Francis’s “mode of thinking” means he is defending the church ahead of the interests of victims of clerical sexual abuse.

Ms McAleese said she had hoped Pope Francis would be different. But she had been astounded by his visit to Chile last January during which the pontiff described as “calumny” allegations by abuse survivors there of a cover-up by Bishop Juan Barros of Osorno.

Speaking ahead of World Meeting of Families in Ireland next week, which culminates in a two-day visit by the Pope, she said: “[Pope Francis’s] formation as a priest and a bishop is in a mode of thinking that puts the defence of the institution first.”

The former president added: “I think the instinct for that, and the formation that trains people in that, kicked in most obviously earlier this year in Chile. I was astounded by what happened.

“I did believe that this Pope was different because he said he was going to be. We had been told that when he was in Argentina he routinely insisted on mandatory reporting of priests who behaved criminally towards children.

“So when he went to Chile in January and denounced victims and accused them of defamation – he accused them of being liars essentially. And [he] believed the briefings he got from bishops when we know that he also got other briefings that drew to his attention the stories of victims; that he chose to believe one side – and that was the side that protected offending bishops and offending priests.”

The survivors said when the bishop was a priest he knew about their abuse by Fr Fernando Karadima and did nothing about it.

“The day they bring me proof against Barros, I will speak,” said Pope Francis. “There is not one piece of evidence against him. It is calumny.”

However, it later emerged a letter addressed to Pope Francis from abuse survivor Juan Carlos Cruz was presented to chairman of the pontiff’s sex-abuse commission Cardinal Seán O’Malley in 2015.

In it, Mr Cruz detailed his abuse by Fr Karadima as allegedly witnessed by Bishop Barros.

Ms McAleese said this had been another “appalling week” for the church. Her comments came in a wide ranging interview with Brendan O’Connor on the Marian Finucane Show on RTÉ Radio 1,

The Vatican this week expressed “shame and sorrow” in response to a Pennsylvania grand jury report which found that more than 1,000 children in six dioceses there had been molested by 300 Catholic priests over the past 70 years.

Senior church officials were found to have taken steps to cover up the abuse. A grand jury said it believed the “real number” of abused children there might be “in the thousands”.

“I read the report from Pennsylvania. It’s just so depressing and oppressing to think of all the thousands of children who are carrying the burden of that and will carry it through their lives because an institution they trusted failed them yet again,” said Ms McAleese.

“Reading it was a horror story. I didn’t sleep very well after. What kept coming back to me was the very early days of our own experience of here in Ireland when the church was inclined to pass stories off as just ‘once offs’. These are just uncharacteristic bad apples, you can’t blame the whole bunch. And then the realisation that actually, no, this is probably a 6-10 per cent problem.

“These events were orchestrated. It’s not only systemic; it was directed from central command and control, which is the Vatican. It strikes me as impossible to believe that all bishops acted equally negligently by coincidence. That’s the problem.

“We have had a number of major reports into the church. All of them repeat the same kind of issues. How bishops dealt with priests by moving them. We would have been told this was all pure coincidence. We now know that that simply is not and cannot be the case.”

As to whether Pope Francis was aware of what was happening in Pennsylvania, Ms McAleese said she believed he would have been briefed on it.

“I would imagine he would have been very well aware,” she said. “When you read the report of the grand jury, they remark they were pleased that the names of many of the offending priests were handed spontaneously to them by the diocesan authorities.

“So one has to assume that since the diocesan authorities handed these over to the state authorities in the United States that these would be well known, certainly in the latter days, that they would all have been sent to Rome. And he would have been briefed on them.”

Ms McAleese also said she would not attend any of the World Meeting of Families events but would attend a State event to welcome Pope Francis.

She described the gathering, which will take place in Dublin next week, as “essentially a right-wing rally” against same sex marriage and abortion.

Thousands of people are expected to attend the six-day event which will culminate with a Mass in the Phoenix Park next Sunday, at which Pope Francis will be the chief celebrant. It will be the first papal visit to the Republic in almost 40 years.

“It’s always been essentially a right-wing rally within the church’s teaching,” said Ms McAleese on Saturday. “It was designed for that purpose, to rally people, to get them motivated to fight against the tide of same-sex marriage, rights for gays, abortion rights, contraceptive rights.”

Earlier this year, the Vatican barred Ms McAleese from taking part in a conference to mark International Women’s Day after her attendance was opposed by the most senior Irish man at the Vatican, Cardinal Kevin Farrell.

“The insult to me was personal and deliberate,” she said. “For a period of three months when I didn’t know it was Cardinal Farrell who banned me, I tried every way diplomatically to have the matter resolved and couldn’t. I thought it would not play well at home in Ireland and because the Pope was coming to Ireland.

“I had the help of the Archbishop of Dublin [Diarmuid Martin] but we couldn’t get it resolved. It was only at that point that I discovered it was Cardinal Farrell. And of course when I discovered it was him I realised then he knew exactly what he was doing.

“This was not the case of a Vatican official who didn’t know I was a former president of the country that the Pope was coming to. And that it was likely to be a matter of controversy.

Ms McAleese said she made a formal complaint against Cardinal Farrell to Pope Francis, but has not received an acknowledgment.

“The Pope is the only person as his superior who could rectify and deal with and judge that complaint, so I made a formal canonical complaint to the Pope about Cardinal Farrell’s actions,” she said.

“Having received neither an acknowledgement or a reply to date, I can only presume that since the Pope is his immediate superior that this was done with the Pope’s approval.”