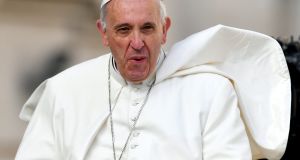 Pope Francis: Will reflect on much of what his bishops’ have had to say. Photograph: Getty Images

Friday is the day which many feel will define the papacy of Pope Francis.

What he announces in his Apostolic Exhortation Amoris Laetitia (The Joy of Love), later in the morning will clarify his popular image as a liberal or conservative pope. However, one thing is certain – that whatever he says will upset some Catholics.

Amoris Laetitia will deal with the family, but what people will be looking out for is how it will address the situation of divorced and civilly remarried Catholics when it comes to Communion. And, not least, what it says about the role of women in the church and about gay people.

Informed opinion indicates that Pope Francis will emphasise the compassionate application of such teaching and in accordance with what each unique pastoral situation requires. It is believed he will do this while acknowledging the age-old teachings of the church in family-related matters,

Amoris Laetitia will be Pope Francis’s formal reflection on both synods in which he may, or may not, take on board the agreed final statement last October of the approximately 190 bishops from around the world who took part in both gatherings. It was dispiriting for those hoping for change.

It is believed he will reflect, however subtly, much of what the bishops said in that statement, if only to affirm his commitment to shared governance of the church by the bishops with the pope; such collegiality as was envisaged by the Second Vatican Council.

For those Catholics of a more traditional outlook the bishops’ statement last October was greeted with welcome relief as indicating that the barque of Peter remained on the path laid for it by the late Pope Saint John Paul II and Pope Emeritus Benedict XVI.

But traditional Catholics do not trust this pope to stay that course. Today will tell whether their doubts are justified.

Represented at the 2014 and 2015 synods by some of the more powerful prelates in the church, the anxiety of traditional Catholics about Pope Francis became manifest when it emerged early in synod deliberations last October that 13 conservative cardinals had written to him expressing concern that the “new process [at the synod] seems designed to facilitate predetermined (liberal) results on important disputed questions”.

They also noted how “the collapse of liberal Protestant churches in the modern era, accelerated by their abandonment of key elements of Christian belief and practice in the name of pastoral adaptation, warrants great caution in our own synodal discussions”. Pope Francis dismissed their concerns as groundless, but that did not go down well.

The synod’s final report last October stood firm in opposition to same-sex marriage and urged cohabiting couples to seek “the fullness of marriage and the family”. Some saw change in it relating to access to the sacraments for the divorced and civilly remarried. But this interpretation has been contested by the more traditionally-minded.