Pope Francis has dinner with six from Ireland, Britain and Germany 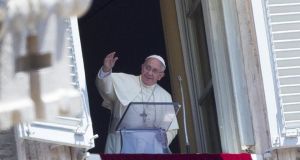 Pope Francis waves to thousands of pilgrims gathered below in St Peter’s Square as he delivers the Sunday Angelus from the window of his study in the Vatican City, on Sunday. Photograph: EPA/CLAUDIO PERI

Pope Francis this morning “humbly” asked six clerical sex abuse victims for forgiveness for the “grave crimes of clerical sex abuse” committed against them. The Pope made his comment to the victims in a homily delivered at mass in the Domus Santa Marta, his Vatican residence.

The homily came during what proved to be an intense occasion for both the abuse survivors and the Pope. The six victims - two Irish, two British and two German - first met the Pope over dinner at the Santa Marta last night. Then after attending 7am mass today, they had breakfast with the Pope.

After that, the Pope then spent three hours with them, listening to their different stories one by one.

At a Vatican briefing, Holy See spokesman Father Federico Lombardi said the fact that the Pope had spent so much time with the victims was a “huge sign”, adding that all the victims had expressed their “profound gratitude” for what was a moving encounter with the Pope.

Father Lombardi said that the meetings with Pope Francis had been distinguished by his “usual style...of pastoral listening” in which the important thing was that the victims felt they were being “heard, received and embraced”. This was important for the victims not only in relation to the Church but also in relation to society, said Father Lombardi, adding: “This was not a superficial listening from the Pope...He is someone who tries hard to listen...he has dedicated his entire life to pastoral listening...This was a spiritual and profound dialogue...”

Asked by The Irish Times about the fact that one of the Irish survivors, Marie Kane, had asked Pope Francis to remove Cardinal Sean Brady as Archbishop of Armagh and Primate of Ireland, Father Lombardi declined to comment, saying that the content of the meetings between survivors and the Pope was “a private matter”.

Father Lombaardi also added that yesterday’s meeting was not so much concerned about “concrete measures” in relation to the handling of the clerical sex abuse as about a highly significant gesture of compassion and solidarity.

Given that different lobby groups for sex abuse survivors, including an Argentine one, had complained this weekend that they had not been invited, Father Lombardi was asked to explain the criteria according to which yesterday’s six survivors had been picked. He replied that this had been the work of the Vatican’s Commission For The Protection Of Minors which, faced with the difficult task of organising a meeting like this, had relied on its own German, British and Irish members. All eight Commission members, including Irish activist and former victim, Marie Collins, were present at Santa Marta throughout this morning’s meeting, the first of its kind during the pontificate of Francis.

Asked if, in the light of polemics from survivors lobbies such as the US group SNAP, yesterday’s meeting was not simply a “PR” move on the part of the Holy See, Father Lombardi vehemently rejected that suggestion, saying: “Time and again these lobbies fail to understand the real intentions of the Pope and I am not surprised by their negative spin on this meeting”.