Plan for male-only deacons in Catholic diocese criticised by priests

Proposal is ‘insensitive, disrespectful of women and counter-productive’, says group 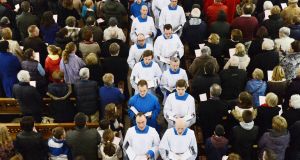 Following three years of preparation, a permanent deacon can perform all the functions of a priest except celebrate the Eucharist. File image: Alan Betson

The leadership of the Association of Catholic Priests (ACP) has said it fully supports a parish priest in Limerick who has publicly opposed moves in his diocese to have male-only deacons.

Fr Roy Donovan, parish priest of Caheronlish in Co Limerick, has objected to the decision by his Archbishop Kieran O’Reilly, of Cashel & Emly, to set up a working group to look at introducing the male-only permanent diaconate in the Catholic archdiocese.

Cashel & Emly covers most of Co Tipperary and part of Co Limerick.

In a statement, the ACP said “Roy’s objection is based on the fact that currently the Church confines the lay diaconate to men, even though Pope Francis has a commission working on the history of women deacons in the early church, with a view to possibly opening the diaconate to women also.”

The priests said: “We would further call on every diocese in the country to hold off on the introduction of the permanent diaconate until such time as the Vatican commission reports, and Pope Francis makes a decision based on that report.

“We believe that proceeding with the introduction of male deacons at this time, and thereby adding another male clerical layer to ministry, is insensitive, disrespectful of women and counter-productive at this present critical time.”

Last year Pope Francis appointed six men and six women to a commission to study the issue of women deacons, particularly their ministry in the early Church. In addition he appointed the Jesuit Archbishop Luis Ladaria Ferrer, secretary of the Vatican’s Congregation for the Doctrine of the Faith, as president of the commission.

On ordination, following three years of preparation, a permanent deacon can perform all the functions of a priest except celebrate the Eucharist. A deacon can conduct the liturgy of the word at Masses, read the gospels , deliver the homily, and preside at funerals, marriages, and baptisms.

He may be married but if so can only become a permanent deacon with the permission of his wife.

It was in 2001 that the Irish Bishops first received permission from Rome to go ahead with the male-only permanent diaconate in Ireland. In March 2009 the Bishops appointed a national training authority to approve and monitor formation for permanent deacons in Ireland under the chairmanship of Bishop of Kerry Raymond Browne.