‘My house was destroyed. The whole place was soaking’ 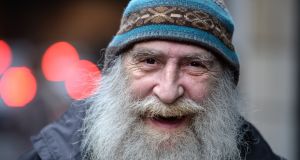 Don Johnston: Alone organised for repairs to be done to his home when it was damaged during Storm Ophelia and while he was in hospital. Photograph: Dara Mac Dónaill / The Irish Times

In July 2017 Don Johnston suffered a major stroke. Having already suffered a series of mini strokes earlier that year, he ended up spending the following 19 months in hospital.

During the year and a half he spent away from his home recovering from the stroke, a number of heavy storms passed over the country including the destructive storm Ophelia which hit Ireland in October 2017. Johnston would later discover that his small house in Clontarf, Dublin where he had lived since 1986, was seriously damaged in the bad weather.

“My house was destroyed. Most of the slates were missing from the roof and the rain had got inside. The whole place was soaking. It would have taken about six weeks for me to fix the damage in good health but six months after my stroke.”

While in hospital, Johnston was approached by a representative from the Alone charity which supports older people around the country. When the volunteer heard of the damage to his house, she arranged for Johnston to stay in a B&B upon his release from hospital in February 2019 while repairs were made to the building. Two months later, Johnston finally went home.

“When I pulled up to the house tears ran down my face. The builder was there explaining what was going on but it went in one ear and out the other. The house was completely done, it was magnificent. I didn’t even recognise it.”

While Johnston owns his home, he says there are many elderly couples living nearby who are nervous about the security of their tenancies as rents continue to rise. “They just want to close their door if they have a rented room and not come out or get involved. They’re worried they’ll lose their rental home, they’re terrified of what might happen. It’s a living nightmare for them.”

Born in the North Strand in the 1950s, Johnston knew many of the families who were relocated to the new Ballymun flats in the 1960s. If the Government was able to provide housing to so many people nearly 60 years ago, it should be able to construct social housing for the thousands who are homeless today, he says.

“When I was born there were tenements everywhere so they built a place called Ballymun. When it was first built it was a wonderful place, there were no drugs and very little crime then and they put those buildings up very quickly. That problem was solved in a matter of years.”

Two remanded over failure to stay away from Strokestown farm