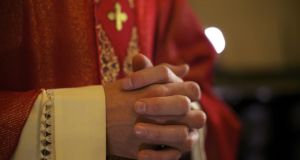 The Association of Catholics in Ireland said full membership of the church should be extended to those in second relationships. Photograph: Getty Images

A group of lay Catholics has called for the Church to revise its teaching on contraception and access to the sacraments for those in second relationships.

The Association of Catholics in Ireland (ACI), which is committed to reform in the Irish Catholic Church in the spirit of the Second Vatican Council, has also called for significant lay involved at the Synod on the Family which is to take place in Rome next October.

At a recent meeting with the Archbishop of Dublin Diarmuid Martin the ACI discussed what it described as “a shared acknowledgement of the changing circumstances of family life, to which the result of the marriage equality referendum adds a further dimension”.

The ACI also met Archbishop Martin prior to the extraordinary synod on the family in Rome last October. At the more recent meeting they discussed with him the need for a review of the marriage annulment procedure, marriage breakdown and second relationships and access to the sacraments for those in second relationships, pastoral care for LGBT people, their parents and families and the need for the teaching on birth control in Humanae Vitae to be revised.

Also discussed was “ the pressing need to engage in concrete and practical dialogue with those disenfranchised from the institutional church and in particular those young people raised in the church but no longer active in it”.

ACI representatives suggested there be an all-Ireland assembly of the church to address concerns such as these and Archbishop Martin offered his encouragement to those involved in finding remedies at grassroots level. He said there was a need to find different ways of being church today.

An ACI submission for the second synod on the family in Rome, which had been sent to Archbishop Martin, had been forwarded to the Vatican, he said.

Among its recommendation is that priests who left the church to marry should be invited back and that women and married couples should train priests for ministry of marriage and the family.

It also called on the church to recognise and support co-habiting couples to help them move towards permanent commitment and said that there should be no exclusion from the sacraments for those in mixed marriages or second relationships. “Communion should not be used as a reward or punishment,” it said and that full membership of the church should be extended to those in second relationships.