Irish missionary priest recovering after being shot in Peru 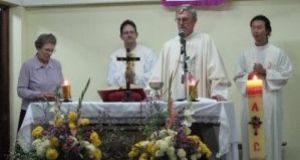 Fr Gerard Desmond (72) has been working in Peru for 11 years.

An Irish Columban priest has been discharged from hospital in Peru following injuries he suffered in an armed robbery on Saturday.

Dubliner Fr Gerard Desmond (72) has been working in the country for 11 years. He is currently stationed in the parish of Christ the Liberator in the slum district of San Juan de Lurigancho, outside Lima.

Preparing to go on holidays, Fr Desmond drove to a bank in Lima to withdraw money to pay bills and salaries in the parish before he left. He withdrew the equivalent of $2,000 (€1,655).

He drove back to the parish “and as he got out of his car to open the gate, a car stopped behind him, and three men, two with guns drawn, demanded the money that he had withdrawn,” said Fr Cyril Lovett communications spokesman for the Columban missionaries.

Fr Desmond “ refused to hand it over so they hit him on the head with a revolver butt and shot him in both legs above the knee. Luckily the bullets went through the fleshy part of his thighs and hit no bones or arteries and lodged in the parish door.

“A man working on a building site nearby, apparently an ex-policeman from Venezuela, saw what happened, rushed to him, bandaged his wounds and drove him to the nearest hospital,” Fr Lovett said.

The priest received nine stitches to his head and several more on the leg wounds, “but as of today he was released from hospital and is apparently none the worse for what happened,” said Fr Lovett on Monday.

Fr Desmond (72) was born in Westland Row but grew up in Swords, Co Dublin. He attended the O’Connell School in Dublin and joined the Columbans at Dalgan in 1963. Ordained in 1969, he has served in Korea and Canada and several parishes in Peru.