Pets in the City: Room for paws at Dublin’s Smithfield 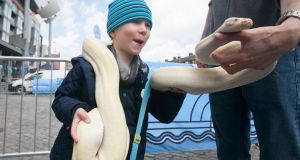 Roger Kask (6) from Booterstown with a snake at Pets in the City supported by the DSPCA and King of Paws in Smithfield Square, Dublin. Photograph: Gareth Chaney Collins 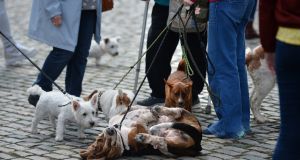 Relaxing in the sun at Pets in the City event in Smithfield Square, Dublin. Photograph: Dara Mac Dónaill / The Irish Times 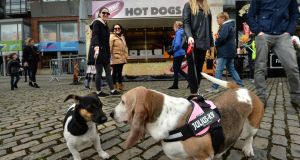 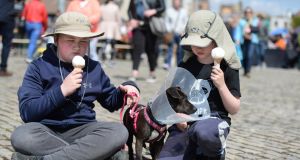 Enjoying the cones, Sam and Ian McKeen, from Blackrock, with their rescue dog Jilly, at Pets in the City event, Smithfield Square, Dublin. Photograph: Dara Mac Dónaill / The Irish Times

The duck had enough. In a takeoff that was almost vertical, it rose from its narrow cage at Pets in the City on Dublin’s Smithfield and flew above startled onlookers before swerving towards the Luas end.

Dublin Lord Mayor Mícheál MacDonncha understood. He has had such moments. He remarked how it must be “nice to be able to do that. You know . . . ‘I’m outa here’.” Duck handler Oisín Grayson gave chase, if casually.

It was clear the duck had done this before. Soon he would be back in its cage to pose for more camera phones, as earlier with Order of Malta volunteer Donal Malone (16).

“Hold him like this, around the wings,” instructed Grayson, of Wooly Wards Farm in north Co Dublin, who soon arrived back with the once free duck for more photographs.

At the Pet Portrait stand Jan Nolan from Celbridge, Co Kildare posed for a picture with Shadow, her five-year-old miniature Yorkshire terrier, who took it in his stride. Why Shadow? “He goes everywhere with me,” she replied. Ask a silly question.

Aoife O’Connor (16) and her sister, three-year-old Lily Carmody (“different fathers” was the unsolicited explanation) were the personification of grace under pressure as Richie from Kinsealy Pets Store draped an albino Burmese python across their young shoulders. Once again, camera phones were poised.

“Now guys, help me hold him. Just the tail, just the tail. The tail can’t do anything,” said the unflappable Richie, making everyone wonder what the python’s other end might do. Still, hordes of excited youngsters waited for their turn to wear the curling reptile across their shoulders too.

He and the snake were, advisedly, way across the square from the Bunny Zone where wary rabbits of varying and hairy hue gambolled in a pen, fascinating very small people who eventually joined them.

“Furry pets are an amazing way to relieve stress,” said a sign nearby. But maybe not for furry pets being mauled by enthusiastic infants. That sign continued: “Taking a few minutes to cuddle a bunny can do emotional wonders for you.”

And Sarah Conlon was there with her father, Declan, and their three big Newfoundland dogs. “All he wants is to be rubbed,” said Sarah as a passerby patted one dog’s head. “Just like men,” said the easily pleased passerby, “that, and maybe a pint in the pub,” he added.

Pets in the City was organised by Dublin City Council in association with the Dublin Society for the Prevention of Cruelty to Animals (DSPCA) who were microchipping dogs for €15.

Event organiser Kathryn Byrne said: “Dublin is a city of animal lovers and people who just love their pets. So the idea is to encourage people to bring their dogs out and to encourage good pet ownership.”

The Lord Mayor took a picture of his cousin Claire Fitzpatrick with an Irish wolfhound. The breed was “one of the long-standing symbols of Ireland and there is actually a Lord Mayor’s chair which isn’t used now. It’s in storage. I think it’s in City Hall at the moment, which has carved Irish Wolfhounds on it,” he said.

Tracey Carroll of the Irish Wolfhound Club of Ireland has seven of the dogs in her Castleknock home. “We’ve lots of sofas,” she said.