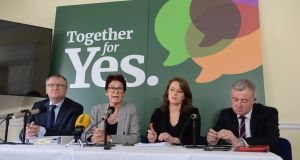 The Eighth Amendment of the Constitution has created “absolute legal paralysis in dealing with crisis pregnancies” and must be repealed if women in Ireland are to receive “appropriate” and “compassionate” healthcare, lawyers calling for a Yes vote have said.

Speaking at the ‘Lawyers for Yes’ press conference on Monday, Gráinne Gilmore BL said the eighth amendment had proven itself to be “a failed legal experiment” and “an outlier among constitutions of the world”.

“A constitutional provision should not get in the way of good and compassionate medical care and a doctor should never feel it necessary to have a stethoscope in one hand and a copy of the constitution in the other,” said Ms Gilmore.

The Government’s proposed legislation, which would allow access to terminations within the first 12 weeks of pregnancy, is “far from liberal” and is “in fact highly restrictive”, she said, noting that terminations during this period would only be provided for under medical supervision, upon certification from a doctor that 12 weeks had not passed, and on foot of a 72 hour waiting period.

She added that the current legislation was forcing women across the State to order abortion pills online which they are ingesting in “an unregulated and an unsuitable environment.”

“It is profoundly socially unjust that a woman has a constitutionally protected right to travel if she can afford it yet is criminalised if she can’t.”

Peter Ward SC said the insertion of the eighth amendment into the constitution in 1983 had resulted in “serious adverse consequences” for women.

“The adverse consequences predicted 35 years ago have come to pass and are now unfortunately a daily reality for women facing crisis pregnancies in Ireland.

“The only way we as a society can respond in a positive way to those crisis pregnancies is to vote yes and to remove the eighth.”

Waiting until the ‘threshold of death’

Asked to comment on legal professionals who have called for a No vote, Mr Ward said without a repeal of the eighth amendment women would continue to be forced to wait until the “threshold of imminent death” before being able to access a termination for medical reasons.

“We are saying let us be responsive in a caring and compassionate way. Let’s allow the doctors and the women and their families to make the correct choices for their care and give them the legal and constitutional space in which to do that.”

Liam Herrick from the Irish Council for Civil Liberties said a vote for repeal would mean a shift from “regulation by force of law to providing the support of law to pregnant women”.

He noted that a repeal of the eighth amendment would allow the Government to strike a balance between the rights of pregnant women and protecting the foetal life.

“Repeal means moving this issue away from the courts into our Oireachtas where the people have a continuing democratic control over the appropriate balance that should be struck between the rights of women and the common good.

“It is about moving Ireland into the position of other progressive, modern democracies where complex questions can be dealt with in a safe and nuanced way.”