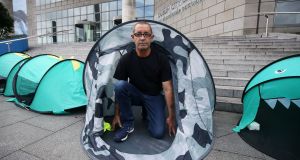 Andy O’Driscoll, a volunteer with Inner City Helping Homeless, during its protest outside Dublin City Council Offices on Wood Quay to highlight the number of people living in tents. Photograph: Brian Lawless/PA Wire

A homelessness charity erected a line of empty tents outside the Dublin City Council Civic Office on Wood Quay on Thursday to highlight the increase in homeless people sleeping in tents across the city.

Inner City Helping Homeless (ICHH) CEO Anthony Flynn, said the number of tents in Dublin has increased by 28 per cent in six months, with nearly 40 per cent of the overall number of rough sleepers now living in tents. These figures come from nightly readings carried out by the organisation, he said.

Government figures for June showed there were 10,172 homeless people in Ireland, made up of 6,497 adults and 3,675 children.

“This is an epidemic, a crisis of epic proportions that needs a multi-agency approach to solve,” said Mr Flynn.

“We have people who are working poor, people with mental health and substance abuse issues. It’s now time we form a task force on eradicating rough sleeping in our city.”

Andy O’Driscoll who has been a volunteer with ICHH for two years says the number of people using its service is growing. Speaking at Wood Quay he said: “We want the Government to do something to help the homeless. It’s a disgrace the way they’re treating the people . . . We helped 190 people the other night but we counted 238 out last night [Wednesday night] our highest number yet. It’s increasing every night.”

Nicola Casey has volunteered for the charity for four years. “It’s getting beyond a joke at this stage, people sleeping in hubs, hostels and hotels. The people I speak to are feeling very hurt, lost, like nobody cares,” she said.

“All day, every day in the office, you’re having people knocking on the door, they’re hungry, and there aren’t enough facilities for them.”

“They’re left walking the streets in the rain, in the scorching sun, they have no sun cream. They have no ways of getting in and out of the sun, no way of keeping hydrated as well. No matter what time of the year, there’s no good time to be homeless.”

In response to today’s protest, the Dublin Region Homeless Executive stated, “We do not want sheltering in tents to become normalised and we are actively working with our Outreach Service, An Garda Síochána and Dublin City Council’s public domain unit to prevent this.

“Tents do not necessarily provide more protection for people who are homeless and prevent people from engaging with the support services that can assist them to move to accommodation. “