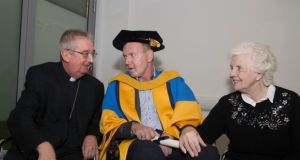 Fr Tony Coote was conferred with an honorary doctorate of science by UCD last December. He is pictured here with Archbishop of Dublin Dr Diarmuid Martin and his mother Patricia. Photograph: Colm Mahady/Fennells

Tributes have been paid to social justice campaigner Fr Tony Coote, who has died aged 55, more than a year after being diagnosed with motor neuron disease.

His funeral takes place on Monday.

Fr Coote, who was administrator of Mount Merrion and Kilmacud parishes in south Co Dublin, was a popular figure with parishioners and the wider communities in which he served.

Róisín Duffy, CEO of the Irish Motor Neurone Disease Association (IMNDA) said Fr Coote had “time for everyone, he connected at some level with everyone and had an army of supporters around the country”.

“His was a huge presence in Mount Merrion and Kilmacud, he helped everyone and raised a phenomenal amount of money for the organisation,” Ms Duffy told RTÉ’s Morning Ireland on Thursday.

“From the minute he was diagnosed he set himself a target, he wanted to help others and set a target of walking the full length of Ireland, over 550 kilometres, against medical advice.”

The funds raised from that walk across the country went towards supporting nursing services and research, added Ms Duffy.

A book written by Fr Coote about his life and the condition had been of enormous help to many on the same journey with motor neurone disease, she said.

The Catholic Archbishop of Dublin Diarmuid Martin said Fr Coote’s determination in the face of his illness was “a breath of fresh air”.

Archbishop Martin said the last time they met Fr Coote had been unable to speak, but they had managed to joke about the fact that when he moved to a downstairs bedroom it did not have curtains.

“He never lost his sense of humour. He humbled us in the face of what he could do,” he told RTÉ’s Today with Miriam O’Callaghan show.

“He was exceptional. He worked in three parishes including UCD and had a great relationship with young people. He did extraordinary work in UCD.”

Archbishop Martin said: “He had great priest friends who were with him to the very end and also his brothers and carers. He kept them all going.

“He decided from day one (of his diagnosis) that this was his new ministry, giving hope to those living with motor neurone disease.

“He turned personal tragedy into hope for others. That was Tony, a very normal person.”

“My total mobility went only three, four weeks ago,” he said. “I had two really bad falls.”

However, in the summer after his diagnosis, Fr Coote completed a pilgrimage, dubbed ‘Walk While You Can’ from Letterkenny to Ballydehob, raising €600,000 for motor neurone research and services.

Half of the money raised from the walk was earmarked to fund healthcare services for people with the disease and the other half was to go towards a research project aimed at better understanding how the disease progresses.

The walk was the subject of an RTÉ documentary called ‘Walking the Walk’. It followed Fr Coote’s journey through Donegal, Sligo, Mayo, Galway, Clare, Limerick and Cork.

The programme showed how people and communities on the route turned out to welcome and support him.

Fr Coote was chaplain at UCD for almost 10 years, and was conferred with an honorary doctorate of science by the college last year.